Not remodeled left atria and mitral regurgitation: what learn from microstructure

Chronic mitral regurgitation (MR) is the most common type of heart valve disorder, frequently characterized by left atrial (LA) enlargement as a compensatory mechanism. This change in LA dimension may increase the risk of atrial fibrillation (AF) and is predictive of cardiac events such as the development of congestive heart failure and increased thromboembolism. The LA dilatation involves well-known structural alterations as fibrosis and cardiomyocytes degeneration, but little is known about the structure of not dilated LA in patients with severe MR and in sinus rhythm, and the possible presence of alteration common to those of dilated LA. This study has been conducted to identify the structural changes in the LA wall of patients with chronic MR in sinus rhythm, in the absence of previous history of AF, with similar degrees of left ventricular remodeling but divergent LA size. 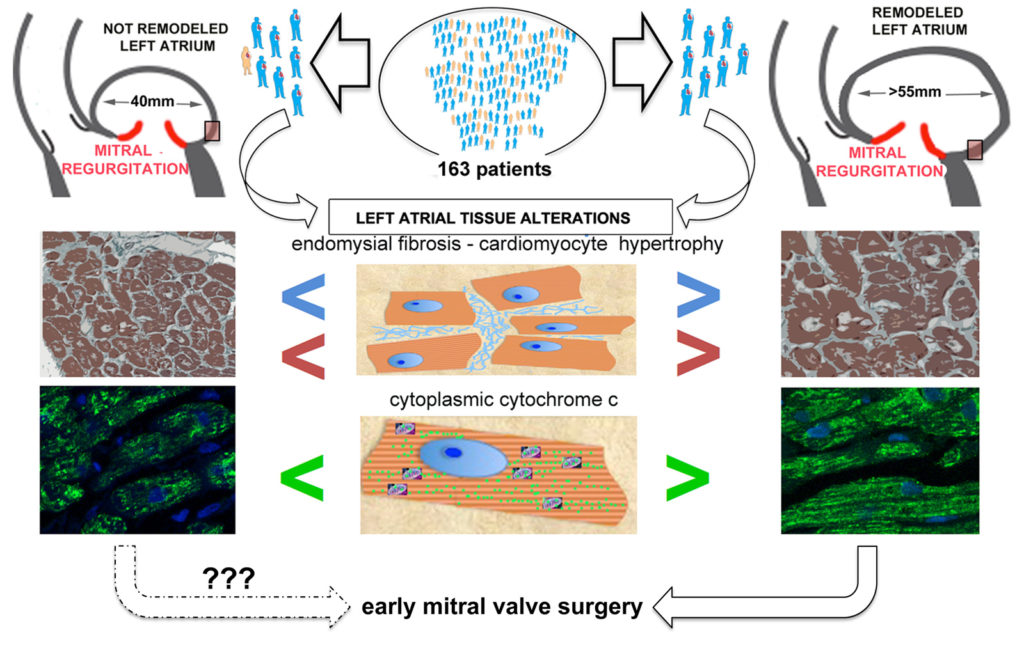 Analysis of sections submitted to histology (hematoxylin/eosin, Movat’s pentachrome) and immunohistochemistry showed alteration of moderate entity in all patient’s biopsies. Morphometric quantification demonstrated higher amounts of endomysial fibrosis (not of collagen type III) in RLA than in NRLA, delimiting islets of remodeled tissue in a morphologically preserved milieu, which may lead to electrical anisotropy. A lower cardiomyocyte density and higher number of hypertrophic cardiomyocytes were in RLA than in NRLA, suggesting that macroscopic LA remodeling is associated to cell hypertrophy, which in turn is related to atrial size. Confocal microscopy displayed focally disorganized F-actin and no nuclear fragmentation nor proliferating cells in both groups, but the presence of more intra-cytoplasm cytochrome c in RLA vs. NRLA, possibly indicative of more successful escape to apoptosis by NRLA cardiomyocyte via mitochondria.

Our study, though limited by biopsies size and small number analysis on the quantitative results, clearly shows the presence of alterations involving both cellular and interstitial components in LA tissue from patients with chronic MR and sinus rhythm, regardless of macroscopic dimensions. At present for asymptomatic patients with preserved ejection fraction without AF or pulmonary hypertension, European guidelines favor a conservative approach, American guidelines sustain surgery. The first multicenter randomized trial on this topic worldwide comparing early surgery versus watchful waiting, Dutch Asymptomatic Mitral Regurgitation trial (Dutch AMR) is ongoing with results previewed in 2020). Our observation of features analogous to those of patients with AF suggest that macroscopic remodeling LA in the settings of MR is preceded by structural changes, paving the way to further investigation on the preventive role of early mitral valve repair to reduce the occurrence of future FA and ventricular related clinical correlates as heart failure.