Nuclear cardiac imaging: the “old grandma” has still something to say

Ischemic heart disease (IHD) remains one of the most relevant predictors of overall patients’ mortality and a major determinant of sanitary and social costs. Different strategies have been proposed for the early diagnosis of myocardial ischemia, a condition that takes place whenever the amount of blood that nourishes the heart is insufficient to sustain cardiac energetic demands. 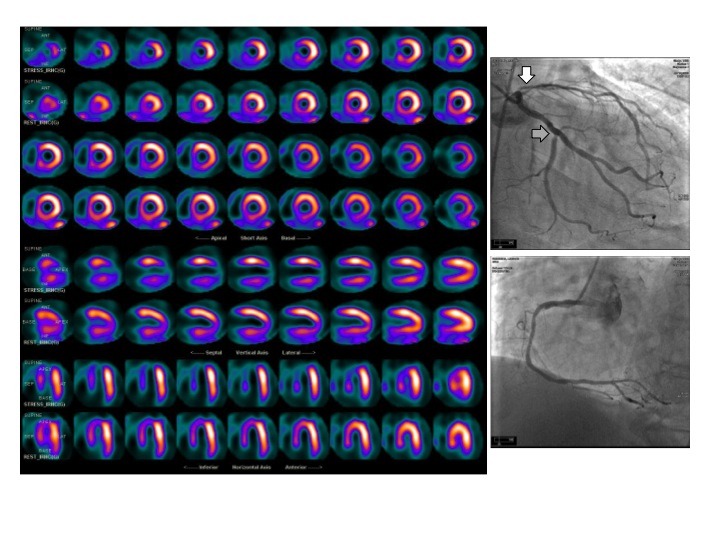 Accordingly, single-photon emission computed-tomography (SPECT) has become the backbone for the evaluation of IHD, still remaining the most diffused technology for the assessment of myocardial perfusion abnormalities. Moreover, in combination with the evaluation of myocardial perfusion, modern SPECT imaging protocols may also allow to measure some of the most relevant parameters of cardiac mechanics (i.e. LV ejection fraction and diastolic function), offering a comprehensive functional evaluation of the patients.

Despite these clinical advantages, cardiac SPECT is characterized by some major technical drawbacks, such as the rather elevated cumulative radiation exposure and the lengthiness of the imaging protocol, that limit its diffusion on an even larger scale.

Interestingly, advancements in SPECT technology have addressed these technical disadvantages, demonstrating that a complete cardiac SPECT evaluation can be routinely performed with limited radiation burden and increased speediness.

Above all, the introduction of dedicated cardiac SPECT devices, equipped with cadmium-zinc-telluride (CZT) detectors, has represented the most relevant novelty in nuclear. These CZT-cameras are characterized by increased overall sensitivity, accuracy and image quality than traditional SPECT devices and allow a radical reduction of radiotracer’s injected dose. Accordingly, a complete image protocol with two separate CZT acquisitions performed after stress and at rest can be performed with as low as 3 mSv, well comparing with the radiation burden of the best CTCAs. Moreover, our group has recently demonstrated that, despite the exceedingly low injected dose, a CZT scan may also allow deriving accurate measures of cardiac regional and global mechanics and to quantify the presence of LV dyssynchrony, a particularly useful parameter in various cardiac pathologies.

The favourable characteristics of CZT-cameras also allow a consistent reduction of image acquisition times and patients’ waiting intervals, reducing the length of an acquisition to just 4-to-6 minutes and of the entire imaging session (i.e. from stress-test to the end of the acquisition) to roughly 15 minutes. Apart from the significant impact on patients’ comfort and tolerability, this ultra-fast protocol may even increase the accuracy of CZT imaging in unmasking the presence of myocardial ischemia and detecting CAD, by combining the assessment of LV perfusion and functional parameters obtained early after the end of the stress test.

Detection of ischemia with early myocardial perfusion imaging: You see more if you watch before.
Liga R, Gimelli A
J Nucl Cardiol. 2016 Apr 13