Oriented attachment determines a shape of nanoparticles in gas phase

Until two decades ago, the process of crystallization from a supersaturated solution was assumed to proceed exclusively by molecule-by-molecule addition. However, some recent pioneering theoretical and experimental studies have revealed that crystals can grow by some other, unexpected, flexible pathways. Although such results have revolutionized our understanding of the mechanism of crystal formation, no all-embracing theory has yet emerged. 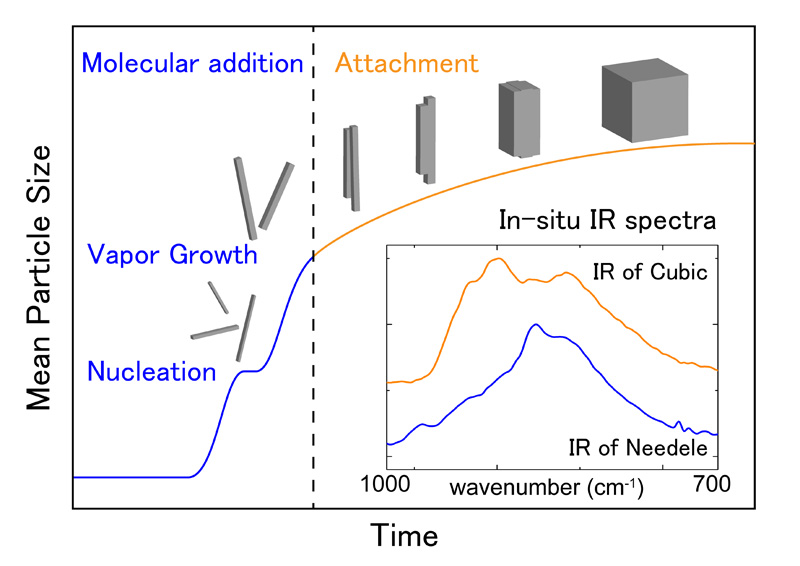 In some systems, nanosized particles have been shown to undergo oriented attachment (selective coalescence) in crystallographically equivalent planes [see, for example, Nielsen et al. Science 336 (2012) 1014], a process that seems to be critical in controlling the nature of the product. In this process, nanosized particles that form initially are believed to rotate and interact continuously until their crystal lattices form a perfect match, at which stage the particles coalesce. However, the mechanism by which oriented attachment occurs in a solution is obscured by the complexity of the interactions that occur at the various interfaces between molecules, nanoparticles, and the (generally aqueous) solution. To overcome this problem, we thought it might be helpful to examine crystallization from a vapor phase, where interactions between the various media could be more readily evaluated. Whereas numerous studies have been made on nucleation of crystals from solution, nucleation from the vapor phase has received far less attention.

In our study, we used a specially developed spatial scanning Fourier-transform infrared spectroscopy to examine in situ the growth of nanosized crystals of molybdenum trioxide (MoO3) through oriented attachment from the vapor phase. By this technique, in combination with ex situ transmission electron microscopy, we were able to observe the structure and morphology of the nucleating and growing crystalline nanoparticles of MoO3. These nanoparticles nucleated homogeneously from a highly supersaturated vapor within about 0.1 seconds of evaporation. The just-nucleated MoO3 nanoparticles then grew by anisotropic molecule-by-molecule addition to form needle-shaped particles elongated along the [011] crystal direction. These needle-shaped particles are selectively oriented in the planes perpendicular to [011] direction in the gas current and, consequently, they evolved gradually into cubic shapes through fusion in a crystallographically favored orientation in the free-flying state in the vapor. The accompanying figure illustrates the crystallization process of MoO3 schematically. We found that the needle-shaped particles behaved as macromolecular growth units in building the cubic particles. This is the first reported observation of a growth process of crystals that is driven by oriented attachment in the vapor phase.

Our study demonstrates a new approach to the understanding of complex crystallization pathways. A comparison of the processes involved in crystal growth in vapor and solution phases could provide a universal view of solvation. Furthermore, these fundamental studies should shed light on ways of controlling the characteristics of the final particles.