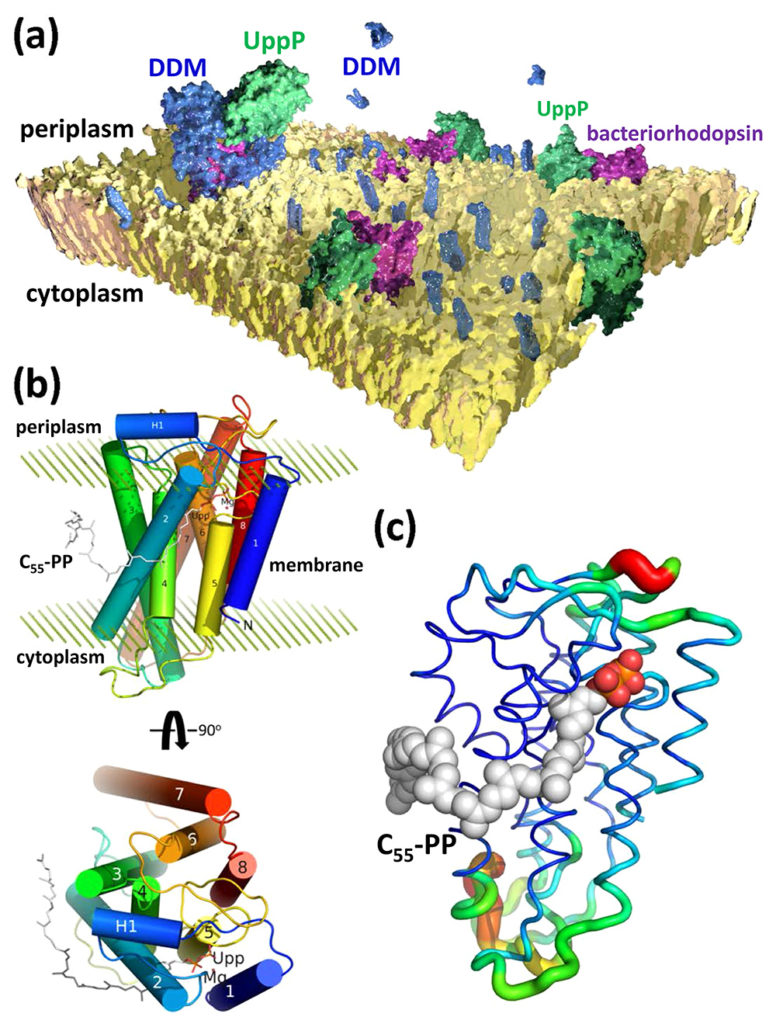 Fig.1. (a) Diagram of the process for purifying V. vulnificus UppP. The N-terminal bacteriorhodopsin (purple) fused-UppP (green) complexes are over-expressed in the E. coli cell membrane (yellow). After cell disruption, the n-Dodecyl β-D-maltoside (DDM) is used for extraction of proteins from the membranes, and solubilizes them by creating a mimic of the natural lipid bilayer environment. Protein-detergent complexes are then purified using Ni-NTA affinity chromatography for further biochemical and structural analyses. (b) Overall structural model of V. vulnificus UppP in complex with C55-PP and Mg2+. Transmembrane helices, labeled from 1 to 8, are shown as cylinders and colored in rainbow. The extracellular helix is purple and labeled as H1. The C55-PP substrate is shown as grey for its carbon molecules. (c) RMSF of individual residues of the UppP-C55-PP complex in 30 ns of MD simulation.

The goal of the current studies is to overproduce the UppP homolog in Vibrio vulnificus, and to determine its catalytic mechanism and structural information within the membrane compartment. V. vulnificus, a marine pathogen leading to rapidly expanding cellulitis or septicemia in humans, often causes large, disfiguring ulcers that require extensive debridement or amputation, making it an extremely virulent bacterium. As UppP catalyzes the production of C55-P during the biosynthesis of bacterial cell walls, this essential metabolic step is expected to be a potential target in searches for new antibiotics for V. vulnificus and other bacterial pathogens.

In this work, we purified active V. vulnificus UppP using a bacteriorhodopsin as a tag fused at the N-terminus of the target proteins (Fig. 1a). Because this system opens new opportunities to investigate specific amino acids critical to enzymatic catalysis using site-directed mutagenesis, we determined the catalytic site of UppP which comprises two consensus motifs—a glutamate/serine (E/QGxxExLPxSSxxH) domain and a putative structural P-loop (PGxSRSGxT). In the former domain, the strictly conserved histidine residue could initiate a nucleophilic attack on the phosphorus center during the substrate hydrolysis reaction. Our structural model and molecular dynamics (MD) simulation studies also show that bacterial UppP has eight transmembrane helices (TMHs), for which the two consensus regions are localized near the aqueous interface oriented toward the periplasm, and both the N- and C-termini are located at the cytosolic site (Fig. 1b and 1c).

In summary, our biochemical and structural analyses suggest a plausible structure of the catalytic core, centered on two consensus regions that mediate the substrate dephosphorylation reaction at the periplasm instead of in the cytosolic compartment. Our data provided new insights into the molecular basis of the UppP-C55-PP interaction in membrane bilayers, and can be applied generally to all bacterial UppP enzymes.