Mass spectrometry has emerged as a highly sensitive technique to study proteins and proteomes. Proteome is an entire repertoire of proteins in its various forms present in a cell, tissue or an organism. The study of proteome is known as Proteomics. Mass spectrometry is routinely used to profile and compare the proteome of samples from healthy and diseased individuals.

Shotgun proteomics, a mass spectrometry data-acquisition method, can be used to identify and quantify most, if not all, the proteins present in a sample. However, due to the stochastic (randomly determined) nature of shotgun proteomics, same proteins may not be identified when the experiments are repeated. This lack in reproducibility is particularly true for the proteins that are in low abundance in cells and tissues. Since low-abundant proteins are often biologically important, use of shotgun proteomics approach for acquiring such data for the purpose of comparison can be limiting. Targeted method is an alternative data acquisition method by mass spectrometry and is a suitable technique for the identification and quantification of proteins across large number of samples because it generates reproducible and consistent results. 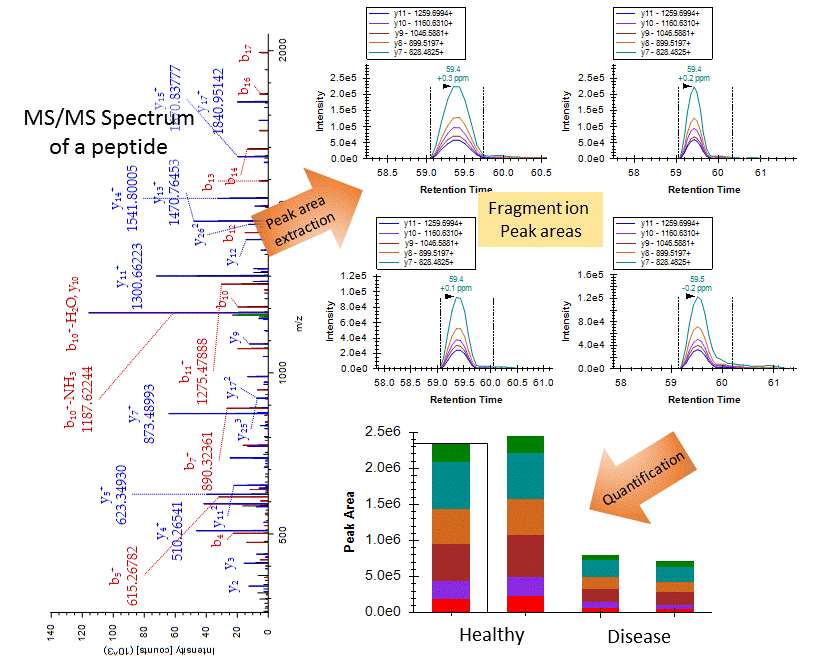 One such targeted method that has lately gained popularity is Parallel Reaction Monitoring (PRM). PRM is performed in mass spectrometers that have high resolving power and high mass accuracy; hence, it is a very sensitive method. Due to high sensitivity, PRM can reproducibly detect proteins that are present in very low amounts even in complex samples, such as cells, tissues, and body fluids.

The workflow for PRM experiment involves separating peptides (protein fragments) mixture based on their hydrophobicity by reversed phase liquid chromatography (RPLC) and acquiring the data in a mass spectrometer using data-acquisition method build for PRM. The data-acquisition method for PRM contains list of peptides, which are exclusively present only in proteins that are of interest to the researcher, and their elution time window (see next paragraph). After the data is acquired and analyzed, the information on abundance of peptides observed by PRM is then used to estimate the abundance level of their corresponding proteins in the samples.

When a known amount of heavier version of synthetic peptides, which matches the sequence of peptides in the list in PRM data-acquisition method, is added to the samples, information on the exact amount of proteins naturally present in the samples from healthy or diseased individuals can be obtained. Such comparison can help researchers determine the mechanism of disease and identify potential drug target for its cure.

To summarize, in proteomics, targeted method has an unparalleled ability to reproducibly identify and quantify subset of proteins across large number of samples.