Heart failure is one of the leading causes of death in the Western World today. It typically involves a deficiency of the heart to provide sufficient blood flow and/or blood pressure to meet the requirements of the body. In the attempt to cope with the increased hemodynamic demand the heart undergoes a remodelling process which results in heart enlargement (cardiac hypertrophy) and ultimately leads to heart failure. This process involves an increase in the size, but not in the number, of individual cardiac myocytes, the main cellular constituent of the heart. Currently there is no cure for heart failure, and long term survival remains poor, with one third of the patients dying within one year from diagnosis. Thus, unravelling the molecular mechanisms associated with cardiac hypertrophy and the transition to heart failure will help identifying new therapeutic targets.

3’, 5’- cyclic adenosine monophosphate (cAMP) is an intracellular second messenger that plays an essential role in the regulation of cardiac function. cAMP is generated when a receptor on the surface of the cell is stimulated by a specific hormone. A variety of different hormones trigger different functional responses in the cell via this mechanism. For example, cAMP is generated when noradrenaline is released in everyday life situations such as walking up the stairs or running for a bus, or in situations of excitement or stress as in the ancestral ‘fight or flight’ response. In response to noradrenaline the heart can then adjust its work to meet the increased demand of oxygen from the peripheral tissues. A key feature of cAMP action is that the level of this second messenger changes in confined intracellular microdomains, within which it activates a series of biochemical events in a highly selective manner. Different receptors generate physically distinct pools of cAMP, thus allowing the generation of distinct responses to different hormones. The enzymes phosphodiesterases (PDEs) degrade cAMP and are fundamental in regulating local cAMP within microdomains. 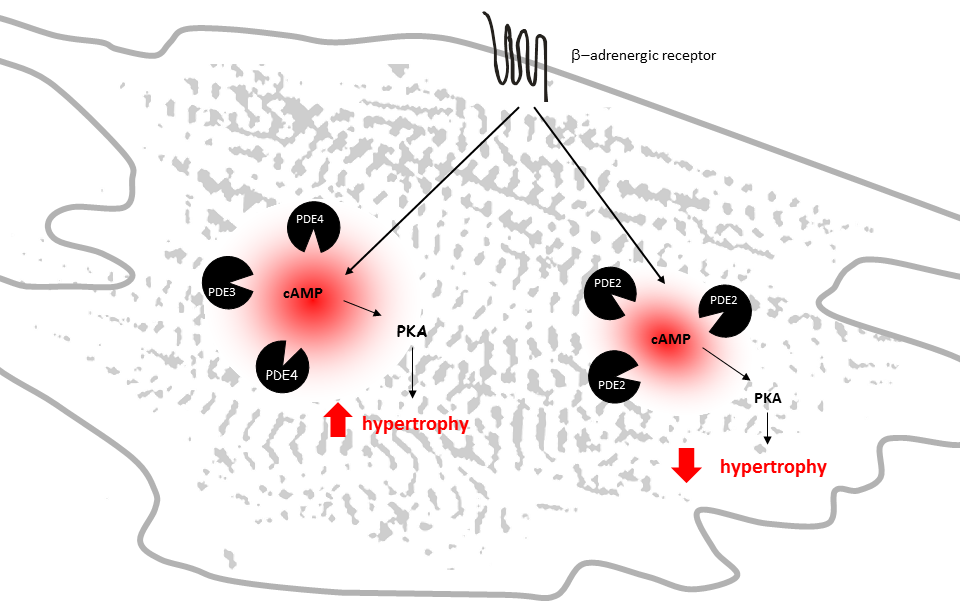 In physiological conditions, cAMP is generated by activation of β-adrenergic receptors in response to stress or exercise. As a consequence, the cardiac output rapidly increases via activation of protein kinase A (PKA) and its signalling cascade. In disease conditions though, chronic elevation of cAMP leads to remodelling and cardiac hypertrophy. Interestingly, and in apparent contradiction with the deleterious effect of sustained elevation of cAMP, increase of some aspects of cAMP/protein kinase A signalling have been shown to benefit the failing heart.

In this study we investigated whether it is possible to identify microdomains of cAMP controlled by different PDEs that either promote or prevent the development of cardiac myocyte hypertrophy. We found that activation of b-adrenergic receptors generates at least two distinct pools of cAMP. One, controlled by PDE3 and PDE4, mediates pro-hypertrophic signals, whereas another cAMP pool controlled by PDE2 mediates antihypertrophic effects (see Figure). We also found that the pool of cAMP with protective effects can block the activation of a transcription factor that would otherwise translocate to the nucleus to trigger hypertrophy.

Our study shows that inhibition of PDE2 enhances the level of cAMP with protective effects and this intervention could help treatment of pathological remodelling of the heart. Current available therapies for heart failure target β-adrenergic receptors. Inhibition of PDE2 would considerably increase specificity and reduce side effects, potentially leading to an improved clinical outcome.