PDGF-D – a potential novel treatment for kidney diseases with scaring

Chronic kidney disease is characterized by scaring of kidneys, termed fibrosis, which is similar to scaring of skin after injury. Fibrosis is a part of wound-healing processes normally tightly regulated and restrained. If fibrosis is unchecked, in particular in the kidneys, the scar tissue replaces normal tissue of kidney, thereby leading to loss of kidney function. The scar tissue in the kidney resembles that of connective tissue, which is composed of extra-cellular matrix, mainly proteins like collagen or fibronectin, and the cells producing it, termed myofibroblasts. 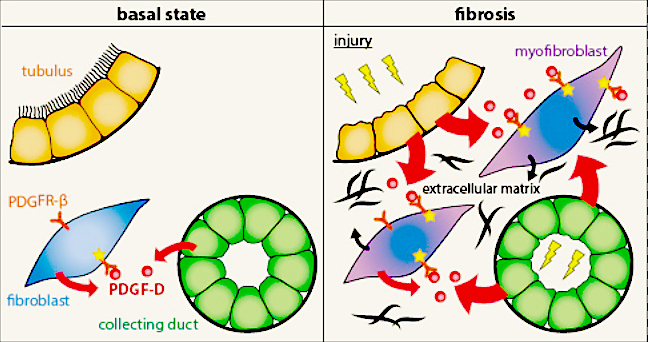 In the healthy kidney, PDGF-D is produced in fibroblasts (spindle cells in blue) and the tubular cells of the collecting ducts (green). It can bind to its receptor PDGFR-β (red Y-shape), which is located on the surface of the fibroblasts. In fibrosis, PDGF-D production and secretion is increased, particularly by injured tubular cells of the collecting ducts but also by injured tubular cells of proximal tubules (light brown cells). Increased PDGF-D binds and activates PDGFR-β (yellow star) on the myofibroblasts, which leads to their growth and activation resulting in increased production of extracellular matrix (black lines), i.e. fibrosis.

In our work we analyzed the role of protein called Platelet-Derived Growth Factor-D (PDGF-D). PDGF-D belongs to the PDGF family of growth factors, which promote cell growth and survival. PDGF-D is secreted from cells and exerts its function through binding to its receptor, the so called PDGF receptor beta (PDGFR-β). PDGF-D and PDGFR-β are a typical example of how cells communicate with each other, termed autocrine or paracrine signaling. I.e. the PDGFR-β can be either expressed on the same cells (autocrine) or different cells (paracrine) then those producing PDGF-D. In the diseased kidneys with fibrosis, both PDGF-D and PDGFR-β are produced in much higher amounts compared to healthy kidneys, mainly in myofibroblast. In addition, PDGF-D is also found to be newly produced by kidney cells which normally do not produce neither PDGF-D nor PDGFR-β. This showed that PDGF-D and PDGFR-β are prominently altered during kidney disease. This increased production was similar in mice and humans, showing that animal models reflect closely human disease and are very well suitable to analyze PDGF-D and PDGFR-β. To analyze the role of PDGF-D in kidney diseases and fibrosis, we used mice that lack PDGF-D (so called PDGF-D knock-out mice). These mice developed normally and did not show any obvious changes up till high age, showing that PDGF-D is not required for development and normal kidney function. Next, we used models of kidney disease that develop fibrosis. We found that, compared to mice with normal PDGF-D, mice lacking PDGF-D developed much less severe fibrosis and kidney disease. In a proof-of-principle experiment we also found that mice with higher PDGF-D compared to normal mice, developed renal fibrosis.

Taken together, we showed that PDGF-D is not required for kidney function in health, but its production is much increased in kidney diseases and induces kidney fibrosis through specifically affecting kidney myofibroblasts. These findings suggest that PDGF-D might represent a novel attractive treatment of kidney fibrosis.