Plants constantly encounter various biotic and abiotic stresses in the environment. These stresses present adverse growth conditions, which affect the plant development, longevity and productivity. The crop production is decreasing rapidly due to the negative impact of various environmental stresses whereas, world population is increasing dramatically. Thus, to address the important issue of food security, improvement in the quantity and quality of crops plants is a major challenge for plant biologists. Unfortunately, like animals, plants cannot move away from the stressful conditions, but for the adaptation and to survive in the environment, they need to reprogram their molecular machinery. One of the vital adaptive responses is triggering a signaling event where diverse molecules and proteins are involved. 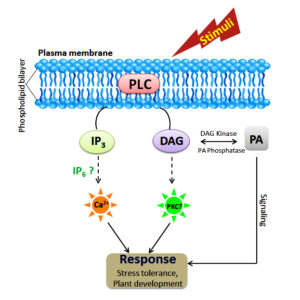 Plasma membrane is the outer envelope of the plant cell and it is made up of phospholipids bilayer. Plasma membrane primarily perceives the stimuli and phospholipids undergo breakdown and remodeling, resulting in the generation of vital lipid signaling molecule. Phospholipases are the primary enzymes (biological catalysts), which are responsible for the phospholipids breakdown and generation of various signaling molecules. Phospholipase C (PLC) is one of the major class of phospholipases, which produces the signaling molecules like diacylglycerol (DAG) and inositol 1, 4, 5-trisphosphate (IP3). However, these molecules are well established signaling components in animal system, there is still a debate that their higher phosphate versions i.e., phosphatidic acid (PA) and IP6, respectively, function in the plant cell. Based on the activity on specific phospholipids, PLCs are divided into two main types i.e., phosphatidylinositol-specific PLCs (PI-PLCs) and phosphatidylcholine-PLC (PC-PLC or nonspecific PLC; NPC). In the model plant Arabidopsis thaliana, nine PI-PLC and six NPC genes exist while, recently,  we found out four and five PI-PLC and NPC genes, respectively, in crop plant rice (Oryza sativa).

PLC members from diverse plant species have been found to play major role in signaling events triggered by various stress conditions. Studies of a number of PLC genes revealed that they control the plant responses to detrimental abiotic stresses such as water deficit, high salt, cold and heat. Vital molecules including DAG, IP3 (known as secondary messengers) and PA generated as a result of PLC activity regulate the function of downstream signaling components for adaptive responses. Moreover, PLC genes, through their unique function are found to protect tomato plants from harmful fungal (Cladosporium fulvum, Verticillium dahlia) and bacterial (Pseudomonas syringae) pathogens. Under phosphate nutrient deficiency, NPCs facilitate the mobilization of phosphate from membrane phospholipids to the site where it is required in the cell, thus, help plants to survive. A significant involvement of PLC function has been also found in polarized pollen tube growth, which is a male organ in seed plants and act as a channel to transfer the gametes (similar to sperm in animals) to ovule for reproduction. This function of PLC was demonstrated in Arabidopsis and mustard (Brassica napus) plants.