Nano is a unit prefix meaning “one billionth, derived from Greek word nánnos means “dwarf”. The potential of matter at nano scale was given by Dr. Richard Feynman in his lecture “There is plenty of space at the bottom”. His idea was widely accepted as the new technology termed Nanotechnology. At the nano level the physical and chemical properties of the material changes because the nano size provides more surface area for interaction with various molecules. This results in material with unique properties which are different from the bulk material. Utilizing the advantage of these new properties, in the current scenario, there are numerous uses of nanotechnology based applications. Zinc oxide nanoparticles (ZnO NPs)  are used in cosmetics, paints, medicines and food industry. However, prolong exposure to these nanoparticles (NPs) can cause several health ailments like breathing problems, memory loss and birth defects. 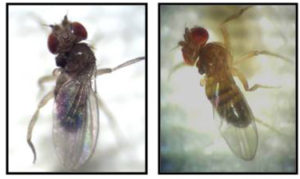 Effects of long term exposure of ZnO NPs using fruit flies (Drosophila melanogaster) to mimic human biology were studied. Various scientific literatures and organizations have emphasized on the importance and validity of the use of fruit flies in experiment related to the detrimental toxic effects of various chemicals.

It was observed that exposure of NPs makes flies incapable of climbing to the top the fly culture tube (7 cm height) in desired time which can be easily achieved by normal flies. There was no effect on aging on exposure to ZnO NPs exposure. The major effect of long term exposure to NPs was observed in progeny flies, where flies were observed with single wing and abnormal thorax. The physical abnormalities were also passed on to the next generation flies reared on food containing NPs or normal diet. The severity of physical abnormalities increases on continuous exposure to NPs in subsequent generations. Based on body structure the overall populations can be classified into normal flies, mild physical deformity, i.e., flies with damaged wings, moderate physical deformity, i.e., flies with single wing  and severe physical deformity i.e. flies with single wing and abnormal thorax (Fig. 1).

The observations clearly indicate that NPs exposure causes severe damage to the genetic machinery, or impairment at the cellular level, resulting in flies with abnormal body parts and transfer of the same to the following generations. Elevated cellular stress and damaged genetic material was also observed in  flies exposed to ZnO NPs. All the observation clearly shows the  harmful effects of exposure of ZnO NPs.

We emphasized on the detrimental effects of long term exposure of ZnO NPs on the health of an individual, but also for generations to come. Thus, it’s very important to have well structured safety guidelines before these particles were used in various commercial applications. It is necessary to have adequate knowledge of  the benefits and risks which these materials bring when used in day to day life.