There is a barrier in the brain, known as the blood-brain barrier, which strictly regulates the exchange of substances between the blood and this organ. The blood-brain barrier restricts the passage of drugs into the brain and therefore, limits the available treatments for diseases such as Alzheimer’s and Parkinson’s. But this barrier not only restricts the entry of substances, but also their exit. So, how does the brain remove its waste products?

In recent studies, we show that the brain has its own waste collection system. Waste products are packaged in containers, the containers are expelled from the brain, and then, outside the brain, they are eliminated. As we will show, this will permit to obtain relevant information about the brain status. But let’s not get ahead of ourselves and let’s describe how the garbage collection system works. 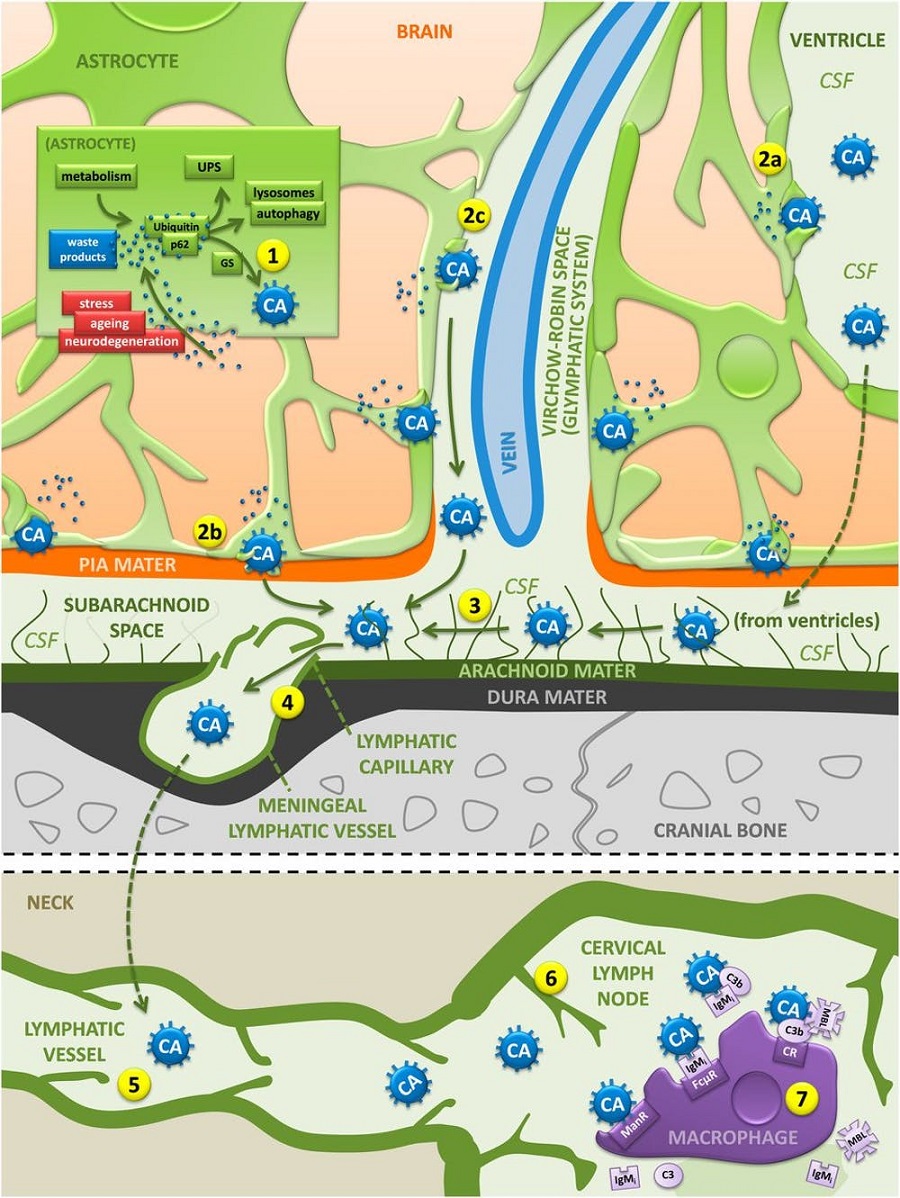 The containers of waste products, called corpora amylacea, are generated by astrocytes, star-shaped brain cells with foot processes that expand around them. Astrocytes form the corpora amylacea and label them with particular markers called neo-epitopes, which specify their destination once they are expelled from the brain.

These corpora amylacea are spherical and relatively large structures. They can reach a diameter greater than 20 microns, exceeding the 10 microns of blood capillaries diameter. Although they are too large to be removed through blood, the brain has other resources to get rid of them.

Physically, the brain “floats” inside the skull suspended in an aqueous medium called cerebrospinal fluid. Well, some brain waste substances are poured directly into this fluid, and this is how corpora amylacea find their way out of the brain.

In summary, the result is a deep “brainwashing” that can be essential for brain’s correct working. Furthermore, these findings offer a new approach to diagnose brain diseases. The fact is that, in the same way that the analysis of garbage bag contents allows us to know the habits of the people who generated them, studying the waste products present in corpora amylacea of the cerebrospinal fluid can give us an idea of how the brain is working. Therefore, the analysis of the contents of the isolated corpora amylacea can be a useful diagnostic tool.

Part of this article has been previously published in the Spanish edition of The Conversation https://theconversation.com/asi-saca-la-basura-el-cerebro-129808