The development and production of nuclear weapons throughout the cold war period led to the proliferation of radioactive waste. Significant quantities of liquid waste were released directly to the environment.  Only the most highly radioactive fraction (in excess of 90 million gallons nationwide) was piped to underground storage tanks. In the early 1990s, waste cleanup efforts began at the two largest waste storage sites, namely Hanford and Savannah River sites.  The cleanup entailed separating small volumes of high activity waste from much larger volumes of low activity waste. The separated high activity waste would then be immobilized in glass form for ultimate disposal in underground repositories. 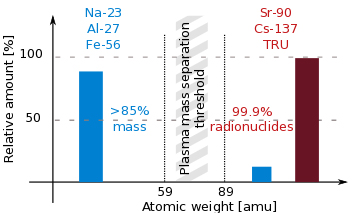 Different chemical processes were designed to separate specific chemical elements from this waste stream.  However, the chemistry of the waste recovered from these tanks is complex, often unknown, and quite different from tank to tank. This makes particularly challenging the chemical processing for cleanup on a large scale.  Multiple separation steps create large secondary waste streams, which impact both the total cost and complexity.  Poor separation makes more difficult the glassification of the high level waste. Overall, the Department of Energy estimates the cleanup cost for all waste sites to be over 280 billion dollars.

One method of physical separation relies upon making the waste into plasma, an ionized gas. By heating material to very high temperatures, the bonds that commonly form chemical substances are broken.  Upon further heating, atoms are ionized, leaving individual ions and electrons.  For example, Aluminum oxide Al2O3, a very common compound in legacy waste, is broken into two Aluminum and three Oxygen ions as well as electrons.  By turning matter into plasma, one can then operate directly on charged particles at the elemental level, eliminating chemistry and heterogeneity issues that often impede chemical separation techniques.

As depicted in Figure 1, the typical composition of radioactive waste stored in these tanks is such that most of the radioactivity comes from a very small waste fraction made of heavy elements, while most of the waste mass comes from light and weakly or non radioactive elements. Discriminating elements based on mass, as one can achieve in plasma, therefore appears advantageous for processing such heterogeneous waste.

For typical waste composition, for the pretreatment of the solid component of the waste prior to being immobilized in glass, the chemical and plasma pretreatment costs appear to be comparable — about $40 per kilogram of solid waste.  However, plasma-based separation may be cheaper overall, since secondary waste streams, requiring further processing are not produced.  Also, plasma mass separation simplifies the processing steps downstream of the pretreatment operations.  High activity waste glassification and geological storage cost about $2000 per kilogram.  Thus, in principle, by better handling heterogeneous waste, plasma mass filtering techniques may reduce the amount of waste requiring glassification, offering  savings up to $650 per kilogram compared to existing chemical techniques.

While the potential savings in plasma separation techniques can be significant, plasma techniques, particularly for high-throughput separation processes, are still not demonstrated.   However, because of the possibilities in reducing costs to the remediation of legacy wastes, these techniques do remain under active research. With increasing recognition of the difficulty, expense and enormity of the problem to clean up legacy wastes, the interest in these possibilities may be expected to grow.