Soil living amoeba Dictyostelium discoideum has been used as a leading model organism for studying eukaryotic cell differentiation and directional cell migration. These functions are interconnected: starved Dictyostelium cells form multicellular aggregates by directional cell migration, and then the differentiation process ensues. These amoebas, unlike plant and fungi, are lacking cell walls and thus their plasma membrane is directly exposed to the environment. 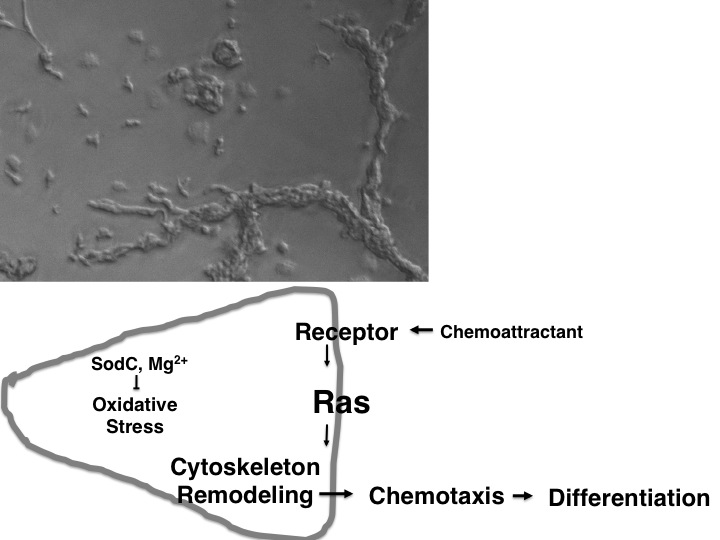 As such, Dictyostelium cells must be equipped with robust defense mechanisms against environmental fluctuations such as low osmolality caused by rainfall. We recently uncovered that hypo-osmotic stress (as a consequence of rainfall) induces oxidative stress in Dictyostelium cells, while the divalent cation magnesium provides protection. One of the major targets of low osmolality induced oxidative stress is RasG, a member of Dictyostelium Ras small GTPase family. Under such condition, constitutively and globally activated RasG proteins move inside the cell from the cellular boundary and thus insulating Ras signaling from the cytoskeletal reorganization essential for directional cell migration. 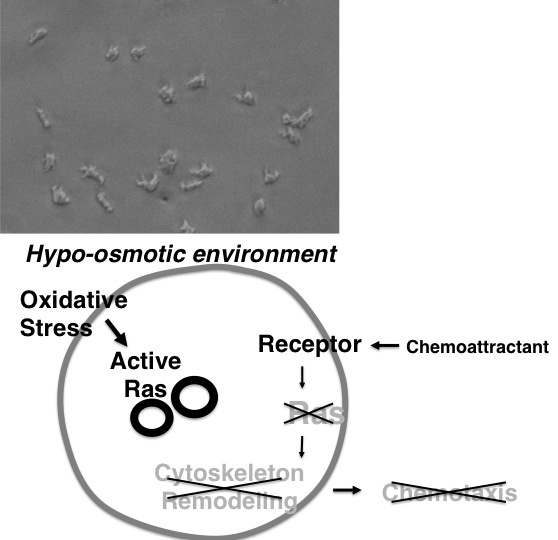 Fig. 2. When amoeba cells were under oxidative stress, induced by hypo-osmotic environment, Ras activity increases and the persistently activated Ras proteins move to intracellular vesicular compartment. Once Ras proteins are insulated from the plasma membrane, cells are unable to remodel the cytoskeleton necessary for the directional cell migration. Consequently, cells will be unable to differentiate into the germ cells(spores).

Interestingly, cells lacking RasG persistently displayed significant level of directional cell migration under hypo-osmotic environment. Also, cells lacking SodC (an enzyme that reduce highly dangerous superoxide radicals) constitutively suffer form oxidative stress independently from the environment, and as such display persistent RasG activation and severely hampered chemotaxis. We thus propose that SodC and RasG proteins are the core regulators of a novel mechanism that functions as a circuit breaker which may prevent oxidatively stressed cells from chemotaxis and thus inhibits the delivery of potentially damaged genome to the next generation.