Adherence to treatment is how clinicians refer to the degree to which patients follow medical recommendations, and it is fundamental to improving health and quality of life. Lack of adherence to treatment may have dramatic consequences not only for health but also for economy. 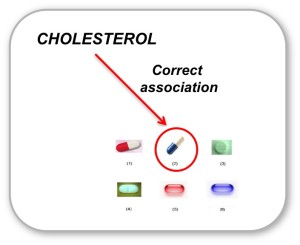 Example of to-be-learned disorder/pill association in the Experiment.

Although the causes for reduced adherence to treatment are diverse, memory for medical information, about all drug treatments, is crucial for good adherence to treatment and therefore to ameliorate the negative effects of the disease. Up to 80% of information provided by the clinician is frequently forgotten almost immediately and recall is rather inaccurate, especially when the patient is rather old. The lack of adherence to treatment is even more severe due to the high number of medicines commonly prescribed to older patients. These people usually suffer from three or more morbidities and therefore the number or drugs prescribed as well as the medical recommendations may tax excessively patients’ memory.

Sometimes help comes from basic science. By adapting procedures that are usually employed in the lab, researchers may be able to ameliorate memory deficits associated with diverse pathologies. That is the case of a procedure imported from animal studies in the associative learning field. When research requires the animal (e.g., a rat) to learn a specific stimulus-response association, feedback is usually provided in the form of a reinforcer (e.g., a pellet). The animal learns that when a light (cue 1) is switched on in the experimental chamber, to push the left lever is the correct response and consequently the reinforcer is provided. However, when instead of the light it sounds a click (cue 2), the correct response is now pushing the right lever and the animal receives the reinforcer. Note that humans learn to discriminate between diverse stimuli and their associated responses in a similar way. For instance, children at early age should learn that when the traffic light switches to red (cue 1) the correct response is “not to cross the road”, however when it switches to green (cue 2) the correct response is “to cross the road”. When the child’s response is correct, parents may provide the reinforcer in the form of verbal approval (e.g., “well done”). Importantly, in all cases learning accelerates and the final accuracy level is higher with a simple modification in the way reinforcers are provided. It happens when instead of always using the same reinforcer, each stimulus-response association is reinforced with a unique reinforcer or outcome. Thus, the child’s correct answer “not to cross the road” might be systematically reinforced with, say, verbal approval (“well done”); whereas the correct response “cross the road” might be systematically reinforced with, say, a kiss. This learning procedure is usually referred to as the “differential outcomes procedure”. When the cues (e.g., red color in the traffic light; the click in the experimental chamber) and the different options of response (e.g., to cross or not to cross the road; the left or right lever) are separated in time, memory is involved.

The differential outcomes group outperformed the control group and memory was more resistant to delay.

In a simulated study we recreated the conditions that many older adults deal with concerning medical recommendations. Memory of younger adults was taxed so that they had to learn and retain which disorder was associated with which pill among six disorder/pill associations. When learning occurred under a control condition, simulating the standard way of providing the reinforcers, memory for learned associations dropped from 1-hour to 1-week delay. When learning occurred under differential outcomes, memory for learned associations was higher and not affected by delay. The differential outcomes procedure can help elderly people adhere to medical recommendations promoting health and reducing medical costs.