Fragile X-associated tremor/ataxia syndrome or FXTAS is a relatively unknown neurodegenerative disorder characterized by progressive development of tremor, ataxia, parkinsonism, and psychiatric problems. The cause of the disease is a so-called premutation in the FMR1  gene, located on the X-chromosome. This premutation consists of an expanded repeat (55-200x) of three DNA building blocks: CGG. This CGG repeat results in the formation of protein aggregates in the brain, which are a major hallmark of the disease.

Fig. 1. In brown the protein aggregates are visible in a brain section from mice with an expanded CGG repeat.

We have developed a mouse model with an expanded CGG repeat that contains an on/off switch. This allowed us to study the effects of the presence of the CGG repeat, but also to study the potential reversibility of the disease by turning the CGG repeat off after a certain period.

What happens in the presence of the long CGG repeat? 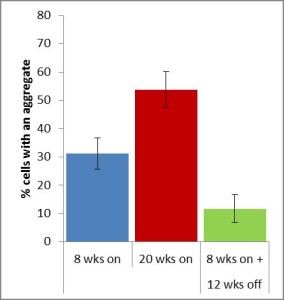 What happens if the long CGG repeat is taken away?

If the expression of the expanded CGG repeat was stopped at an early time point (8 weeks) the number and size of the aggregates decreased. In other words, it is possible to reverse neuropathology. However, if we waited longer (12 weeks) with stopping the expression of the long CGG repeat, reversibility was no longer possible and only a stop in further progression of neuropathology was found. Importantly, reversing the presence of aggregates also prevented the development of deficits in the eye-reflex test.

What does this mean for FXTAS patients?

Taken together, our study shows, for the first time, the potential of disease reversibility in FXTAS. Our results suggest that an early intervention might be beneficial for FXTAS patients. Further research will focus on finding a way to interfere with the expanded CGG repeat in patients, either by taking it away or by blocking the effects it has.