Signaling crosstalk in the Ve-resistance locus of tomato

Verticillium is a fungal pathogen that causes vascular wilt disease in over 200 species of plants, including many crops. The fungus invades through the root and enters the water conducting xylem where it proliferates and rapidly becomes distributed widely in the plant, the primary symptom being leaf flaccidity and abscission. In tomato, resistance to V. dahliae, or V.  albo-atrum, race1 has been attributed to the Ve-resistance locus since the 1950s; yet, despite its economic importance and several decades of cell and molecular research, the way in which Ve functions and the actual mechanism of resistance remains unclear. The locus comprises two closely related back-to-back genes, Ve1 and Ve2, which appear to encode membrane receptor proteins. Resistant plants have a dominant Ve1 allele encoding a full length receptor while susceptible plants (ve1/ve1) only have a truncated nonfunctional protein. 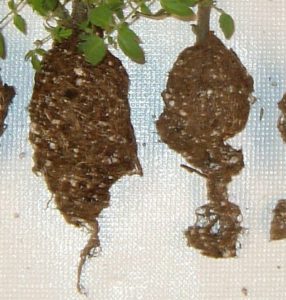 Recent studies showed that Ve2 is expressed constantly while Ve1 is expressed at only low levels in healthy plants but is induced greatly when colonized by Verticillium or even vascular bacteria. Initially, resistance was attributed to Ve1 alone; however, more recent analyses of changes in gene expression with an RNAi-suppressed Ve2-gene showed that Ve2 gene expression is necessary for the elevated stress/defense protein levels, normally associated with resistance; the Ve1 protein controls this in an antagonistic manner. Interestingly, and contrary to expectation, stress/defense protein levels, are significantly higher in susceptible plants suggesting that some disease symptoms (i.e. wilt, stunting) may result from the exaggerated stress/defense protein cascade in plants.

In the current paper we have investigated an alternate role of the Ve1 gene affecting plant growth and development. Experiments with healthy resistant and susceptible tomatoes, as well as Ve1 transformants, showed that in artificial medium or soil, root growth was enhanced  significantly in Ve1 plants (Fig. 1). When infected with Verticillium, there was a significantly lower concentration of pathogen in resistant plants with larger root systems but an equal total fungal biomass in the roots of either the resistant or susceptible plants. Proteome analyses again showed an elevated stress/defense cascade, which correlated with fungal concentration rather than resistance. The fact that a similar total fungal biomass occurs in resistant and susceptible roots and that the presence of Ve1 protein promotes root growth in resistant plants suggests that a resistant host may be outgrowing the pathogen with fewer symptoms rather than relying on partial immunity alone. The perceived resistance is really resistance to symptom expression rather than to pathogen colonization. 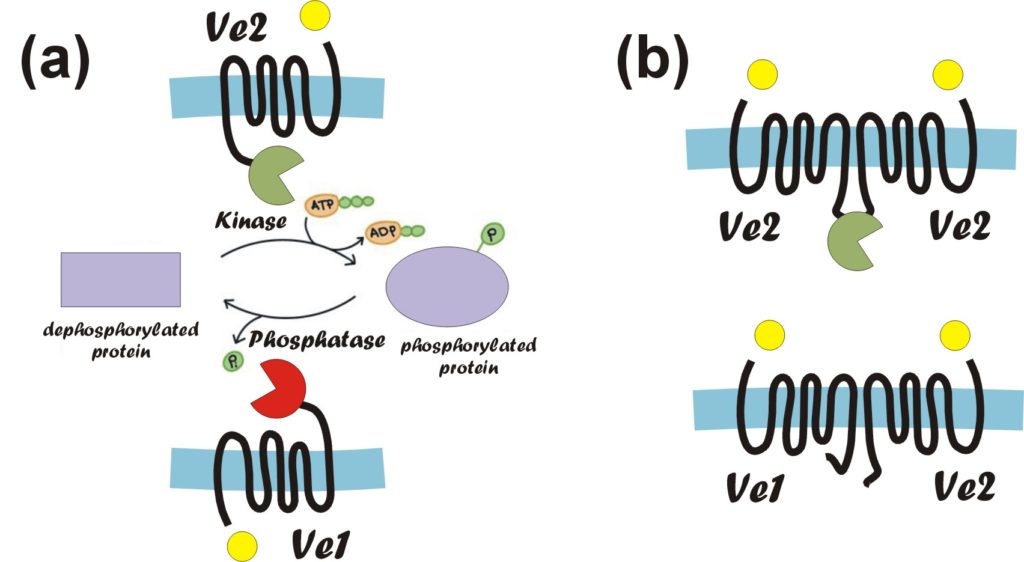 Fig. 2. Proposed models for Ve R-gene function in tomato. (a) Membrane-bound Ve proteins interact with cellular kinase or phosphatase to induce or repress signaling for defense/stress or growth. (b) Ve1 protein forms dimers with Ve2 protein preventing an interaction with cellular kinase.

Taken together all the studies indicate that Ve1 induction plays important roles in both the control of defense genes and the development of roots.  More recent research indicates further that Ve1 induction also has a role in the plant’s response to wounding and the regeneration of roots from cut stems. Clearly, the Ve-locus represents an important signaling intercept in tomato.  Consistent with this, proteome analyses have routinely shown that Ve1 induction results in significant changes in levels of a large number of proteins involved in both primary and secondary metabolism. The antagonistic effects of the two genes, as well as functional domain comparisons have led us to speculate that the two proteins may signal opposing changes by phosphorylation (Ve2) or dephosphorylation (Ve1) as suggested in Figure 2(a). Alternatively, if receptor dimerization is central to Ve2 signaling, the Ve1 protein could act as a competitive inhibiter (Fig. 2(b)). Whatever the case, clearly the Ve-locus is important for the plant’s control of defense and growth and possibly the pathogen’s ability to establish an endophytic relationship.