Seed is one of the successful form of reproduction in evolutionary history of land plants. Compared to primitive plants (ferns, mosses and liverworts) which do not have seeds and require water to propagate themselves, seed plants now dominate biological niches in a wide range of climates. Inside the seed there already existed an embryonic plant prior to germination. A cotyledon is the embryonic leaf which serves as a primary food storage for the seedling to develop true leaves and become self-feeding through photosynthesis. The number of cotyledons is limited to one or two in flowering species, known as monocotyledonous (monocots) and dicotyledonous (dicots) respectively. In some dicots, namely model organism Arabidopsis, cotyledons must turn into green and photosynthetically active because the storage is not sufficient. In such species cotyledons are functionally similar to leaves that are formed from growing point. Both the green cotyledon and leaf have chloroplasts, the specialized plastids for photosynthesis, that are differentiated from proplastids. In cotyledons etioplasts develop from proplastids while seedlings are growing underground. Once the seedling reaches light, it rapidly transforms etioplasts into chloroplasts. By contrast, leaf chloroplasts develop directly from proplastids upon illumination.

Fig. 1. (A) The AtCYO1 knock-out mutant (atcyo1) has albino cotyledons in Arabidopsis. (B) Phylogenetic tree based on CYO1 homologs.

We have previously identified a cotyledon-specific chloroplast biogenesis factor CYO1 (shi-yo-u means cotyledon in Japanese) in Arabidopsis (AtCYO1). Arabidopsis mutant lacking AtCYO1 develops albino cotyledons but normal green leaves (Fig. 1a). AtCYO1 can catalyze formation and breakage of disulfide bonds in proteins, facilitating its correct folding. AtCYO1 coexists with photosynthetic apparatus in the thylakoid membrane where light energy is converted into chemical energy for subsequent CO2 uptake. We hypothesize that AtCYO1 functions in the assembly of photosynthetic apparatus during the rapid chloroplast transformation. Homology search of amino acid sequence shows that the genes encoding CYO1-like proteins are widely conserved among seed plants including rice, the species in a large family of monocots (Fig. 1b). This is surprising because, in rice, cotyledon does not develop chloroplast. In this work, we examined the role of CYO1 in rice (OsCYO1). 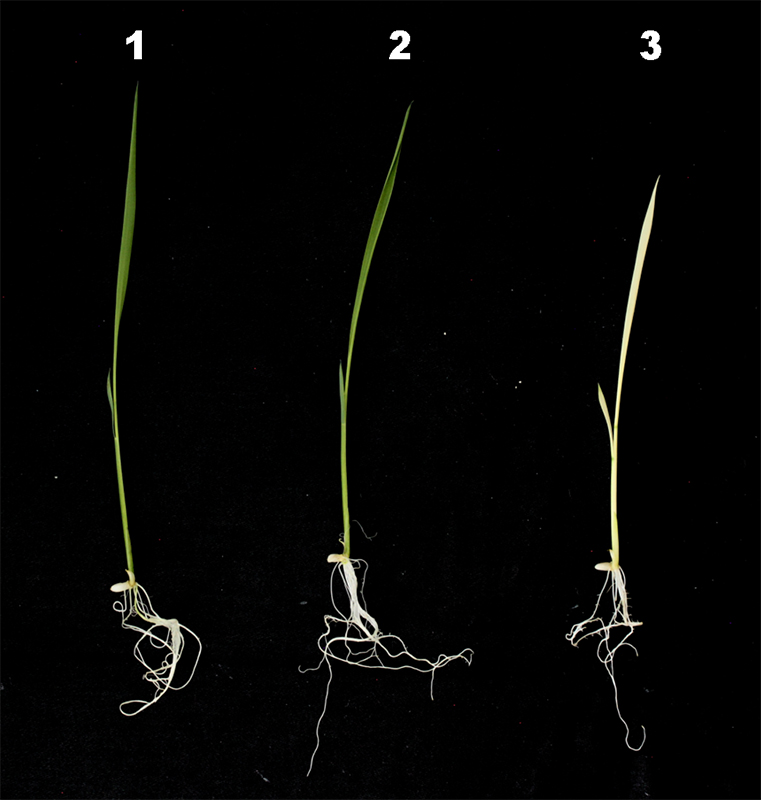 We first confirmed that OsCYO1 had the similar enzymatic characteristics and functions as AtCYO1 does. Genetic transformation with OsCYO1 enabled Arabidopsis mutant lacking AtCYO1 to recover green cotyledons. While the AtCYO1 gene was scarcely expressed in leaves in Arabidopsis the OsCYO1 was expressed in leaves rather than the cotyledon in rice. Then, we genetically modified rice to suppress OsCYO1 gene expression, and found it to be albino seedling (Fig. 2). Evidently, the OsCYO1 takes a critical role in chloroplast biogenesis in leaves and/or whole plant. Relatively moderate OsCYO1 suppression allowed the leaves to be green (Fig. 2), but these green leaves showed lower photosynthetic activities and higher susceptibility to light stress as compared to controls.

This work gives a new insight into the different regulation of chloroplast biogenesis between dicots and monocots. Interestingly, the leaf express less OsCYO1 as it ages. In rice, growing point remained at the shoot base covered by a culm and leaf sheath. While a new leaf is emerging, it may receive a little light as in underground cotyledons in Arabidopsis. CYO1 may be indispensable in assembly/maintenance of chloroplasts in the growing tissue, in the dark or the transition from prolonged darkness to light period.