Simplified molecular diagnostics on a chip for point-of-care diagnostics

Analysis of blood, urine, and saliva often serves as the primary basis of diagnosis and treatment. Clinical specimens contain signature molecules (‘markers’) such as proteins and nucleic acids that are indicators of infection, cancer, and other diseases, and are detectable by immunoassays and molecular or nucleic acid-based tests. Immunoassays use antibodies to capture and ‘label’ a particular analyte, such as another protein associated with a pathogen, enabling its detection by optical or electrochemical means. Molecular tests can distinguish DNA or RNA molecules according to their unique sequences of bases. A short-length synthetic ‘oligo’ of DNA will exclusively hybridize to a complementary sequence of DNA or RNA, and as such serves as a highly specific probe of nucleic acids characteristic of viruses, bacteria, parasites, cancer, or other mutations.  Molecular tests can achieve extraordinary sensitivity—approaching single-molecule levels of detection—by incorporating enzymatic amplification processes.  For example, the temperature-programmed polymerase chain reaction (PCR), and more recently, constant-temperature methods such as LAMP (Loop-mediated AMPlification), can generate a greater-than-million-fold replication of an oligo-primed target DNA/RNA, facilitating detection by fluorescence or other means. 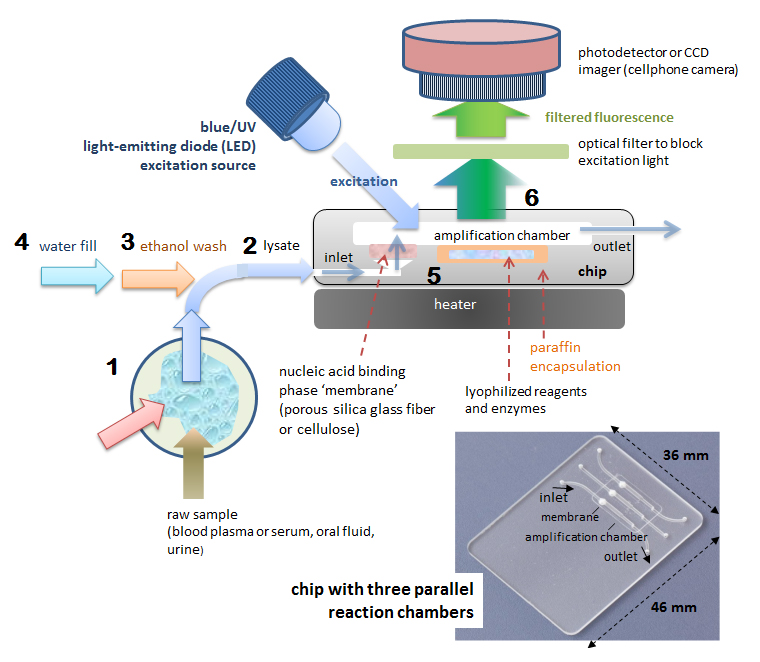 There is a trend to move laboratory tests to the point of care (POC)—e.g., hospital patient bedsides, doctors’ offices, pharmacies, retail healthcare clinics, and as over-the-counter products for home use. While immunoassays are widely implemented in simple devices, POC molecular tests are more challenging because they require sample processing, controlled heating, and instrumentation for detection. POC molecular diagnostics systems typically feature a single-use plastic cartridge (‘chip’) that hosts a miniaturized fluidic network for sample processing and analysis. The cartridge is mated with a portable instrument that provides regulated heating, fluid actuation (pumping), fluid control (valves), and a means of optical or electrochemical detection. Recently, smartphone platforms have been adapted for point-of-care systems, leveraging their wide availability and adding features such as GPS, wireless communication, and a user-friendly interface.

A representative POC NAAT (nucleic acid amplification test) chip is shown in Figure 1. This chip has a single chamber (30 ml) for nucleic acid extraction, amplification and detection, and includes reagents pre-stored in wax-encapsulated, freeze-dried form inside the chamber. At the chamber inlet is a porous material such as cellulose or glass fiber that functions as a binding phase (‘membrane’) to capture nucleic acids from the sample for subsequent amplification and detection. At test, a sample such as blood plasma or saliva is collected from the patient and mixed with a lysing agent that disrupts cells and viruses and solubilizes their nucleic acids. The resulting ‘lysate’ is then injected into the chip using a pipette or syringe. The lysate perfuses through a porous media. The lysing agent promotes the selective adsorption of nucleic acids on the membrane. The captured nucleic acids are then washed with ethanol to remove any cellular debris and inhibitors. Next, the chamber is filled with water and sealed. The chamber is heated to the incubation temperature (65 °C), melting the wax and reconstituting the LAMP reagents and a fluorescent DNA-binding dye. The target nucleic acid captured on the membrane is amplified and increasing fluorescence from dye-bound DNA can be detected, for example, by a cellphone camera as a positive test result, whereas a non-increasing fluorescence signal is considered a negative test result. A large volume (several hundred microliters) of sample can be accommodated, despite the comparatively small size of the amplification reaction. Parallel chambers provide ‘multiplex’ testing for several pathogens. Blister packs bonded to the chip serve as both liquid reagent reservoirs and one-shot pumps to actuate flow through the membrane for a more fully-integrated and autonomous test device.