To achieve food security by meeting the needs of an ever growing human population, which could reach near 10 billion by 2050, large increases in crop yields will be essential. Environmental stresses, such as drought and salinity, are major constraints on crop production, and this is an increasingly serious problem due to global warming and climate change. Thus, developing stress-tolerant crops is a central challenge facing modern agriculture.

Recent work published in the journal Current Biology, by Paul Jarvis and Qihua Ling at Oxford University in the UK, has shown that a chloroplast protein called SP1 contributes to plant stress tolerance by regulating protein import. Chloroplasts exist in the green tissues of plants. They contain the green pigment chlorophyll, which, as part of a complex multi-protein machinery, is responsible for photosynthesis: the vital process whereby sunlight energy and carbon dioxide from the air are used to make sugars. However, photosynthesis also generates by-products called “reactive oxygen species” (ROS). When overproduced, ROS are damaging, and potentially even lethal, and this is particularly likely to happen under adverse environmental conditions. Thus, chloroplast functions are closely linked to stress responses. 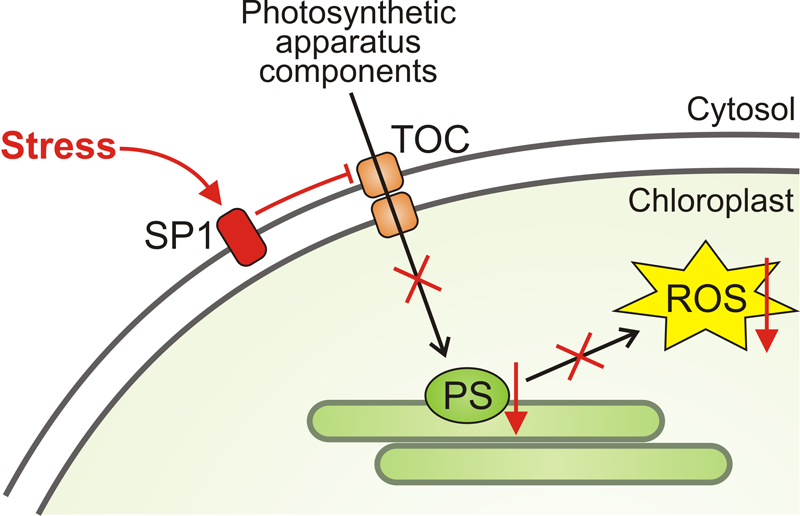 Harmful reactive oxygen species (ROS) generated by the photosynthetic machinery (PS) inside chloroplasts can accumulate to damaging levels in plants experiencing environmental stress. Under such stress conditions, a “master regulator” of chloroplast protein import called SP1 is activated to deplete TOC components of the import machinery. Consequently, the import of new components of the photosynthetic apparatus into chloroplasts from the cellular cytosol is reduced, and this in turn suppresses photosynthetic activity, reduces the potential for overproduction of toxic ROS, and improves plant survival.

Chloroplasts are each enclosed by double membrane called the “envelope”. Most of the proteins that constitute a chloroplast (including abundant components of the photosynthetic apparatus) are synthesised in the cytosol of the cell along with a great many other proteins required elsewhere in the cell. How does a chloroplast let in the correct proteins whilst keeping all of the others out? To solve this problem, the chloroplast has evolved dedicated protein import machines call translocons. The translocon at the outer envelope membrane of chloroplasts (the so-called “TOC” machine) specifically recognizes those proteins that need to be imported. Protein import is highly regulated, but how such control is achieved is poorly understood. In an earlier study, the Oxford group showed that the TOC apparatus is controlled by the SP1 protein, which is also resident in the outer envelope membrane. SP1 is a “ubiquitin E3 ligase”, a type of regulator that directs the removal of unwanted proteins by engaging breakdown machinery called the “ubiquitin-proteasome system”, or UPS. Thus, TOC components can be removed as necessary, under the direction of SP1, which essentially acts as a “master regulator” of protein import. Activity of SP1 is important when the protein content of a chloroplast must be changed during normal plant development, for example during leaf greening when dark-grown plants first receive light. Interestingly, the most recent study from Oxford showed that such regulation is also critical under stress conditions.

To investigate the role of SP1 in stress, cress plants were grown under different conditions that mimic adverse environments, including salt stress and water stress. Remarkably, plants lacking SP1 struggled to survive during stress, whereas plants over-producing the SP1 protein (“overexpressor” plants) were much more stress-tolerant than wild cress plants. In a series of molecular and biochemical studies, SP1 was found to be activated under stress conditions in order to deplete TOC components. As a result of such regulation, the import of new components of photosynthetic apparatus is compromised, and thus photosynthetic activity is reduced. By sacrificing a proportion of photosynthetic productivity in this way, the risk of accumulating excessive ROS is reduced, and so survival is enhanced: the SP1 “overexpressor” plants had very much reduced ROS levels compared to wild-type plants.

Overall, this study highlights the importance of chloroplast protein import and its regulation for stress responses in plants. As the SP1 gene exists in all plant species, these exciting results suggest entirely new strategies for the engineering of improved stress tolerance in crops.