Hepatitis C virus (HCV) was not known to mankind until 1989. The discovery of this virus was possible due to the development of polymerase chain reaction (PCR) technology. Globally, around 180 million people are infected with this virus, with nearly two-thirds of them are chronic carriers. Humans are the only known host for this virus. HCV spreads through blood and blood-related products from infected patients to healthy people. HCV carries single-stranded ribonucleic acid (ssRNA) as the genetic material (i.e. genome). The RNA genome of HCV (approx. 10 kilobases) codes for a single polyprotein, which later then cleaved into 10 individual functional proteins by the host and the viral proteases. 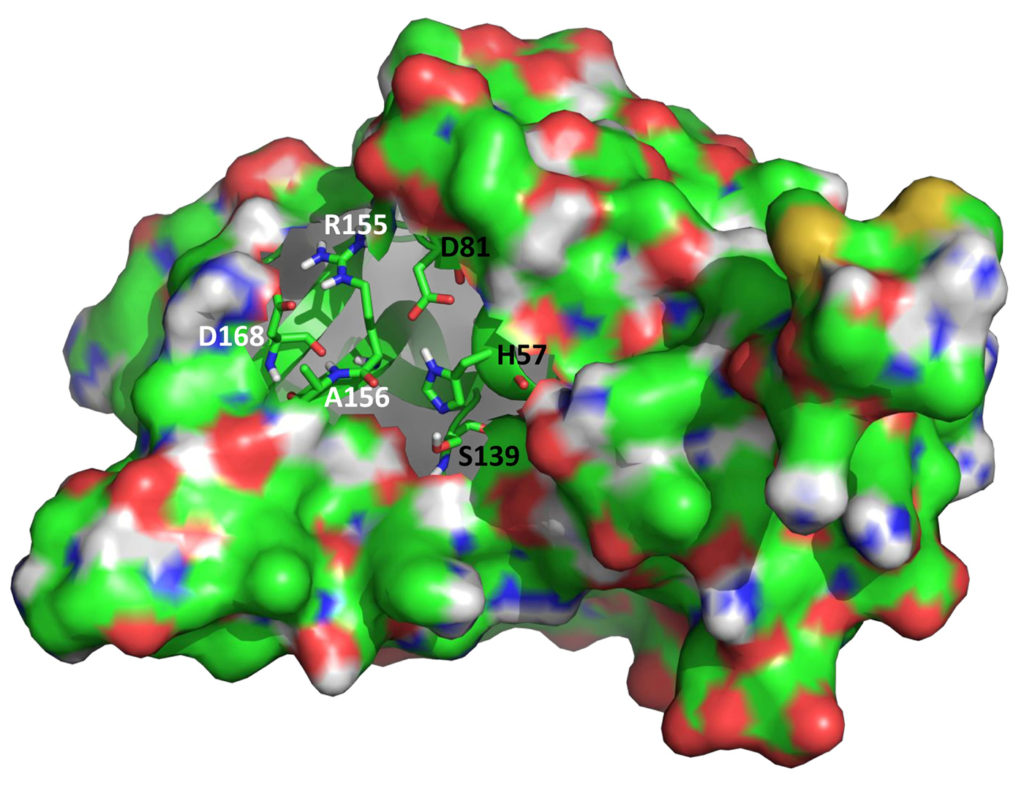 HCV, as the name suggests, causes hepatitis (inflammation of the liver) in the infected patients. In the chronic cases, HCV infection leads to liver cirrhosis and hepatocellular carcinoma (i.e. liver cancer). Until 2013, HCV patients were treated with interferon-alpha and ribavirin drug combination, although the exact mode of action of this drug combination is still poorly known. Moreover, the treatment of HCV is further complicated by the existence of 7 genotypes with only 50% cure rate for the above-mentioned drug combination in genotype 1 infections. As scientists start to understand more about HCV, they started developing drugs that target individual proteins in HCV thereby their replication is inhibited. Researchers have developed drugs (for e.g. boceprevir, telaprevir and so on) that kill the function of HCV protease. Researchers have also developed drugs that kill viral polymerase. By using protease inhibitors in combination with inhibitors of other HCV proteins, the duration of the treatment was greatly reduced and the cure rate got increased to more than 90%.

HCV has found ways to resist the protease inhibitors. HCV has got the highest error-prone polymerase. When replicating its genome, it adds wrong information in the new genome (referred as mutations). While mutations at many places in the viral genome are lethal, few mutations at certain places, on the other hand, benefit the virus. For e.g. many HCV protease inhibitors currently developed bind to the active site (the site in the protein where the actual function is performed) and kill the protease. The active site is represented by three amino acids at specific positions namely histidine 57, aspartic acid 81 and serine 139 (catalytic triad). Mutation(s) in the vicinity of the active site may change the shape of the active site thereby the drug does not bind anymore and the protease still remains functional. From clinical studies, several viral-beneficial mutations in the HCV protease were documented, the most important ones that are close to the active site are R155K, A156T and D168A (Fig. 1). These mutants can resist some of the protease inhibitors as much as 700 folds compared to the wild type. 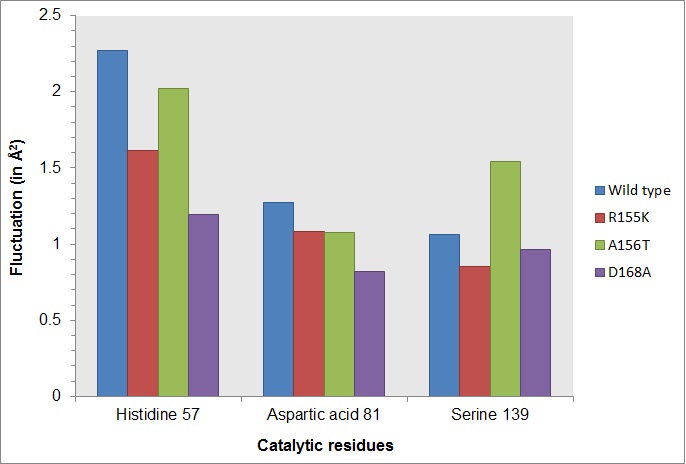 We studied how these mutations changed the topology of the active site in the protease using few online servers and software, to explain the resistance and the change in the protease activity. We found that the pocket (harboring the catalytic triad) in the mutants had changes in its volume, surface, lipo-surface and depth compared to the wild type. The architecture/structure of the protease is maintained by certain amino acids (called stabilizing residues). We found that in mutants the number of stabilizing residues decreased. Additionally, we found that the strategic position of the catalytic residues in the mutants differed by certain Ångstroms (Å), which in turn also affected its energies. We also determined quantitatively the solvent accessibility and fluctuation (Fig. 2) differences of catalytic residues in wild type and mutant proteases. The data obtained in our study will help researchers to develop better drugs and also will help to understand the resistance mechanism.

Biophysical Studies on HCV 1a NS3/4A Protease and Its Catalytic Triad in Wild Type and Mutants by the In Silico Approach.
Palanisamy N, Lennerstrand J
Interdiscip Sci. 2016 Jun 16