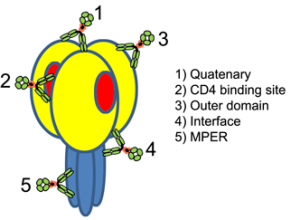 HIV-1 can be bound by neutralizing antibodies that target the envelope glycoprotein (Env) and thereby block viral entry into HIV-1 susceptible cells. HIV-1 specific antibodies are formed within the first two weeks in patients, but usually these antibodies do not block entry and are therefore referred to as non-neutralizing antibodies. Gradually during disease progression antibodies develop better specificities against the HIV-1 Env and after a few years antibodies are generated that can neutralize multiple HIV-1 strains in 50% of the patients. Antibodies bind the Env trimer, composed of three glycoprotein 120 and 41 subunits, at different regions. The top of the Env, composed of the variable region 1 and 2 (V1V2) of gp120, can be targeted by quaternary antibodies that bind at least two gp120 subunits. Antibodies that bind the pocket within and between the gp120 subunits, that is used to bind the host CD4 receptor, are termed CD4 binding site antibodies. The outer domain of gp120 is extensively shielded with N-linked glycans and is difficult to access by antibodies. These antibodies usually target an oligomannose glycan patch and antibody binding is thus glycan-dependent. Interface antibodies bridge binding of gp120/gp41 and antibodies binding the rod-shaped gp41 stem can bind to the membrane proximal external region (MPER) of gp41 (Fig. 1).