Oxide materials, and more specifically, multicomponent oxide materials, have been widely explored in thin-film technology, being the indium-based materials very common. For example, conductive indium-tin oxide (ITO) or semiconductive indium-gallium-zinc oxide (IGZO) are key-materials in billion-dollar industries such as touch panels and displays, fueling the needs of companies such as LG, Sharp or Samsung. The increased use of these multicomponent oxide materials is related to their fascinating characteristics, for example by the possibility to tailor their properties by changing their cationic ratio and/or composing cations. However, indium-based materials are expensive due to the scarcity of this element, identified by the EU as a critical raw material. As such, alternative materials need to be explored, being zinc-tin oxide (ZTO) one of the most promising ones, which already demonstrated great performances in thin-film technology. But to meet the trend of reducing the devices’ size and search for potentially new functionalities, these materials have also been produced at nanoscale, usually in the form of small crystals. These nanocrystals can have different sizes and shapes, being the 1D materials, such as nanowires and nanorods, particularly interesting since they allow for efficient charge transport along the length of the nanostructure, which is quite relevant for electronic applications. 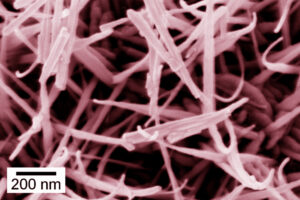 Besides material’s sustainability, decreased manufacturing costs and eco-friendly approaches are also of utmost relevance to be considered when targeting industrial implementation of a given material. Having this in mind, in CENIMAT/i3N (FCT-NOVA, Portugal) a simple and low-cost hydrothermal method below 200 °C was implemented to produce ZnSnO3 nanowires. To achieve a homogeneous and reproductible method, the effect of all the chemico-physical parameters involved in the synthesis was studied, revealing clear relations between the conditions and the resultant ZTO nanostructures. Selecting suitable precursors is one of crucial points to have in mind. In the literature, zinc chloride appears as one of the most used zinc precursors to synthesize ZTO nanostructures, and in fact, comparing with zinc acetate, it allows for more homogeneous results and faster chemical reaction to produce nanowires. When 1D nanostructures are desired, the use of surfactants is very common, since they are directing agents, leading to an easier control of the desired shape. Hence, it was observed that only using a certain amount of ethylenediamine (the surfactant) ZnSnO3 nanowires are achieved. The concentration of NaOH, which acts as mineralizer agent, is also an important parameter. Its influence is already well-known in the literature and ZTO is obtained for intermediate concentrations, while SnO2 and ZnO are preferentially obtained for lower and higher concentrations, respectively. The pressure also revealed a high importance to achieve the ZnSnO3 phase and homogeneous results, being higher pressures (higher volumes) needed, since ZnSnO3 is not the most energetically favorable phase within the ZTO system. The ZnSnO3 nanowires were achieved for syntheses at 200 °C for 24 h (Fig. 1), being observed that at least 12 h at 200 °C are necessary to predominantly obtain nanowires, while longer synthesis (36 h), or higher temperatures (220 °C) lead to the decomposition of the ZnSnO3 phase into Zn2SnO4 and SnO2.

To demonstrate the multifunctional capabilities of this material, the ZnSnO3 nanowires were already used to fabricate piezoelectric nanogenerators providing up to 120 V and 13 µA, enough to light up LEDs and small electronic devices. Additionally, ZTO nanostructures have also been used for photocatalysis, solar cells, sensors, batteries, resistive switching memories and transistors.

ZnSnO3 nanowires are thus sustainable materials, able to be fabricated by low-cost and industry-scalable methods, with multiple applications in strategic areas.