Although ∆9 – tetrahydrocannabinol ( THC ), the only psychoactive component in cannabis, is effective in reducing the nausea and vomiting associated with chemotherapy treatment, the anti – nausea effects of combining THC with other components from the cannabis plant has not been evaluated.  Using established rat models of nausea, our recent study published in Psychopharmacology in 2016, examined whether ineffective doses of THC and cannabidiolic acid (CBDA)—a non-psychoactive component found in the fresh leaves of cannabis that is itself extremely potent in reducing nausea—would together show an enhanced anti-nausea effect. 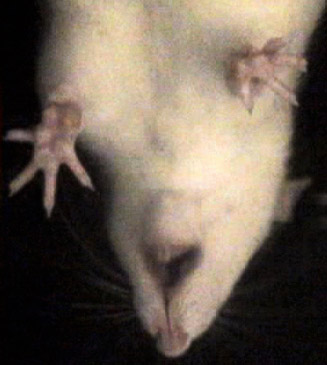 To assess the effect of these compounds on acute nausea—experienced immediately after administration of a nausea-inducing substance—we used a method developed by Grill and Norgren in 1978, known as the taste reactivity test.  In the taste reactivity test, a novel sweet taste is washed over the rat’s tongue by means of a cannula implanted in its’ cheek and then it is immediately injected with a nausea-inducing drug (lithium chloride).  Three days after this taste-nausea pairing, the rat is re-exposed to this sweet taste which causes it to gape (Fig. 1), an index of conditioned nausea elicited by the taste.  To assess whether oral administration of the cannabis constituents, THC and CBDA, could reduce this acute nausea-induced conditioned gaping, we first pretreated the rat by oral gavage with THC, CBDA or a placebo before the taste-nausea pairing.  During the subsequent re-exposure to the taste, if the drug-pretreated rats show less conditioned gaping than rats pretreated with a placebo, the compound is thought to have anti-nausea properties. Although higher doses of THC and CBDA are effective on their own in reducing acute nausea using this model, we selected very low ineffective doses of each cannabinoid and combined them to see if they would produce a synergistic effect to treat nausea.  We found that combined doses of THC (0.5, 1 mg/kg) and CBDA (0.5, 1 μg/kg) dramatically combatted acute nausea, demonstrating synergy between these cannabinoids for this indication.

To assess the effect of these compounds on anticipatory nausea—the experience of nausea reported by patients when they return to the clinic where they previously received their chemotherapy treatment-—we used a rat model developed in our laboratory that mimics this phenomenon. Rats are injected with nausea-inducing lithium chloride and placed in a distinctive chamber for 30 min.  After four of these chamber-nausea pairings, upon re-exposure to this chamber (this time in the absence of any lithium chloride), rats will display aversive conditioned gaping responses, an index of how nauseous they feel because of returning to this context.  Then to assess whether a compound can reduce anticipatory nausea, before they are re-exposed to the chamber, we first orally gavaged the rat with various doses of THC or CBDA or placebo.  If the drug treated rats show less conditioned gaping when they are returned to the chamber that was previously paired with nausea, the compound is effective in reducing the antipatory nausea. We showed that at higher doses both THC (1, 2.5, 10 mg/kg) and CBDA (10 μg/kg) were effective on their own in suppressing anticipatory nausea and combined ineffective lower doses of THC (0.1 mg/kg) and CBDA (0.1 μg/kg) reduced anticipatory nausea. These doses exerted their effects in the absence of any effects on activity levels.

Interestingly, only when combined, higher doses of THC and CBDA caused rats to display more positive reactions to the novel taste.  This increased “liking” response seen only when THC and CBDA were combined may underlie the “munchie” effect often attributed to smoked cannabis.

In conclusion, when delivered orally, ineffective doses of THC and CBDA become highly effective when combined, in treating acute and anticipatory nausea, without impacting activity levels.  The combination of THC and CBDA increased “liking” of a sweet novel taste and may account for the increase in appetite that accompanies cannabis use.