The incidence of resistance to antibiotics from infections is rising with new therapies and strategies required. One recent approach has been to combine antimicrobial silver and antibiotics such as vancomycin to combat infections. However, since antibiotics and silver do not form adducts (i.e., interact with one another), disease-causing organisms may be exposed to marked variations in the amounts of silver or the antibiotic. The antimicrobial peptide, bHKP, forms an adduct with silver ions. As a result, this ensures that the disease-causing organism will be exposed to similar levels of both active agents (peptide and silver), thereby markedly augmenting antifungal activity. 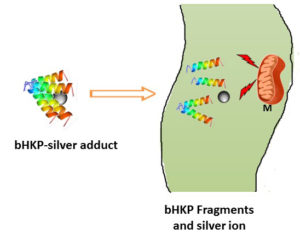 Fig. 1. Proposed mechanism of the Branched Peptide (bHKP)-Silver Adduct: After the bHKP peptide-silver adduct is taken up by the fungi, the peptide is partially digested by enzymes with release of the silver ion. Fragments of bHKP peptide and silver act on targets in the fungi, perhaps the mitochondria (M).

Prior to the formation of the adduct between the silver and antimicrobial peptide, we modified the peptide to improve its activity against fungi. Antimicrobial peptides are ubiquitous in nature and have garnered increased attention in research labs and the biotech industry because of increased resistance to existing antimicrobials agents. We have previously determined that a branched peptide (bHKP) comprised of a specific amino acid sequences of histidines and lysines has marked antifungal activity. Because reduced activity of the antimicrobial bHKP peptide may be due to its digestion, one approach to mitigate enzymatic breakdown has been to incorporate D-amino acids (the mirror image of the more common L-amino acids in nature) within the peptide. The greater the D-amino acid content of a peptide, the slower the enzymatic breakdown of the bHKP peptide by disease-causing fungi. As a result, to maximize antifungal activity, bHKP was modified by varying its L- and D- amino acid content and subsequently bHKP and its analogues were compared for their ability to inhibit growth of fungi.  Surprisingly, replacement of all L-amino acids in the branches with D-amino acids reduced the antifungal activity of bHKP, but replacement of either L-histidines OR L-lysines with their D-counterparts markedly improved the antifungal activity of bHKP. The implication from this experiment is that the Goldilocks principle applies: that is, too little or too much degradation of bHKP decreases antifungal activity, yet partial enzymatic breakdown of bHKP is necessary for optimal activity.

Because histidines are known to interact with silver ions, bHKP with its 48 histidines (and 20 lysines) can readily entrap one or two silver ions within its four-branches.  Notably, the adduct between bHKP and silver showed a marked increase in its antifungal activity, particularly for tissue-invasive Aspergillus species. Against the Aspergillus species, the silver adduct of bHKP had increased antifungal activity compared to the bHKP peptide or silver alone by 30- and 26-fold, respectively. Similar to the peptide alone, bHKP containing all D-amino acids showed the least antifungal activity with silver.

In addition to demonstrating that partial breakdown of the peptide adduct is necessary for optimal activity, a partially degraded bHKP may more readily release the tightly bound silver ion to reach its target within the fungus (Fig. 1). Moreover, since silver and bHKP given sequentially had significantly less antifungal activity, the formation of an adduct and its intracellular uptake by fungi were likely necessary for maximal activity. The combination of two antifungal drugs, silver and bHKP, into one drug is a novel strategy to increase the therapeutic efficacy and reduce development of resistance by disease-causing fungi. Future studies will focus on coupling a targeting compound to the peptide-silver adduct to increase efficacy.