The effect of dehydroepiandrosterone in different stages of osteoarthritis

Osteoarthritis (OA) is likely to become an increasing burden in the coming decades. Current medications for OA, including nonsteroidal anti-inflammatory drugs (NSAIDS), steroids or viscosupplementation provide only symptomatic improvements. The major disadvantage of all current treatments is that they mainly target the symptoms of OA but do not address the fundamental mechanisms by which articular cartilage damage develops. Consequently, a novel treatment capable of protecting or regenerating cartilage extracellular matrix (ECM) would be desirable. Various agents have been developed to slow the progression of OA, and are collectively known as ‘disease-modifying drugs’, however, there is still little reliable evidence that such agents will be successful.

Dehydroepiandrosterone (DHEA), a sex hormone precursor, has been recently proven as protective agent against OA, but the exact mechanism is still unknown. In the current study, the effects of weekly intra-articular injections of DHEA in preventing the progression of existing cartilage degeneration in an OA rabbit model were evaluated. An anterior cruciate ligament transection (ACLT) model was used to create a progressive OA model in twenty rabbits. The animals were treated with DHEA or a placebo and were necropsied at middle or advanced stage of OA. Four regions of of the knee joint, that is medial femoral condyle (MFC), lateral femoral condyle (LFC), medial tibial plateau (MTP) and lateral tibial plateau (LTP), were evaluated by histology respectively. Our data showed that the DHEA treatment markedly reduced the cartilage lesions and delayed cartilage degeneration in the four regions of the knee at middle stage OA, however, only in the LFC and LTP regions when disease developed into advanced stage. 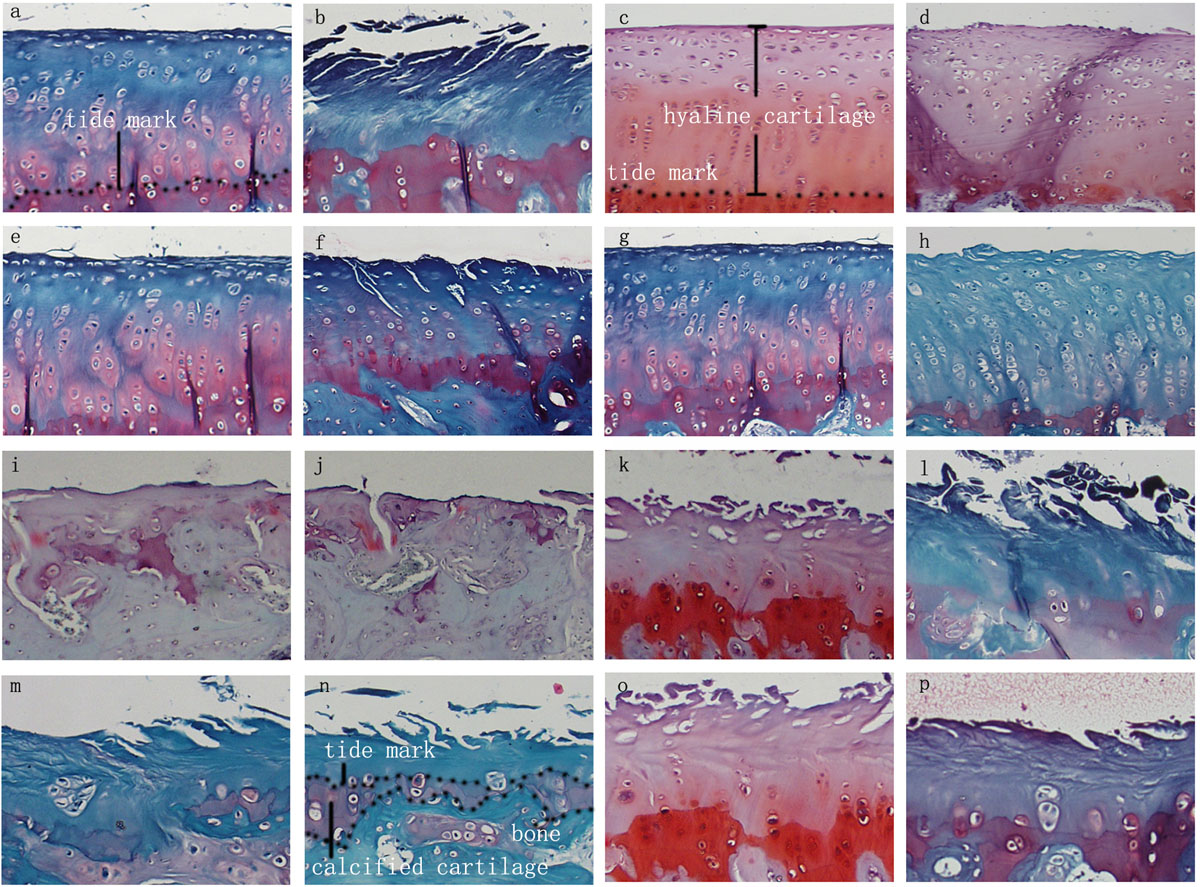 We hypothesize that DHEA most likely plays a beneficial role when the cartilage matrix remains during disease progression, such as in the early and middle stages of OA. In the terminal stage of OA, full thickness cartilage damage occurs, leaving the subchondral bone exposed, particularly in the MFC and MTP, which causes the matrix restoration process conducted by the chondrocytes to be unresponsive to DHEA stimulation. Another explanation might be that in the terminal stage of OA, the cartilage degeneration process markedly exceeds the cartilage matrix recovery process induced by DHEA, leading to severe cartilage damage similar to that in the control group. Thus, the between-group difference in the cartilage quality in the medial compartment is not significant.

Taken together, our data suggest that the disease-modifying efficacy of DHEA against OA is time-specific and site-dependent. DHEA could be used as a disease-modifying strategy to limit the progression of OA, especially in the middle stage.