Antibiotics are one of the major medical innovations of the 20th century. However, due to the escalation of multi- and even pandrug resistance in human clinical isolates, mainly in bacteria such as community-acquired Enterobacteriaceae and nosocomial Gram-negative pathogens (Enterobacteriaceae, Pseudomonas aeruginosa, and Acinetobacter baumannii, antibiotic resistance in bacteria has become a key topic of interest. . Among the last-resort antibiotics, β-lactams carbapenems are vital since they remain active against bacterial strains that have accumulated lots of common resistance determinants. 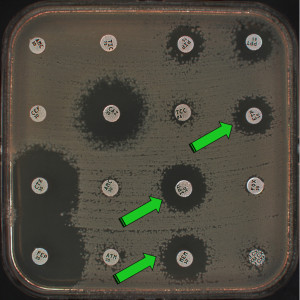 Carbapenemases are enzymes that degrade at least carbapenems. According to their protein structure they may be classified in three classes A, B and D. The class A enzymes (ß-lactamases) modify at least the followings ß-lactams: penicillins, cephalosporins, carbapenems, and aztrenoam.

We had identified, in November 2012, an enterobacterial strain, Enterobacter cloacae DUB from a patient hospitalized in the suburb of Paris. Enterobacter cloacae is an enterobacterial species frequently responsible of bacterial infections such as catheter-related infections and urinary tract infections. This strain was from an urine sample. It was resistant to many ß-lactams including carbapenems. Biochemical and genetic analysis identified a totally novel gene that encoded for a novel carbapenemase, FRI-I, that shared of 55% identitity with any other proteins. As a class A ß-lactamases, FRI-1 inactivates significantly last resort ß-lactams such as carbapenems. Its gene was located on a mobile element that may be spread to other bacterial strains and species and potentially being the source of hospital outbreaks. Discovering this novel resistance trait will contribute to the surveillance of its emergence worldwide. This work highlights the growing number of emerging antibiotic resistance traits that may further limit the number of efficient antibiotic molecules to a very few, if any. This is a source of concern in view of the current dearth of new compounds that show activity against multidrug-resistant bacteria.