The healthy neighborhoods healthy families initiative: A zip code should not determine a child’s health

Published in the journal Pediatrics, researchers from Nationwide Children’s Hospital presented a case study for treating a neighborhood as a patient. 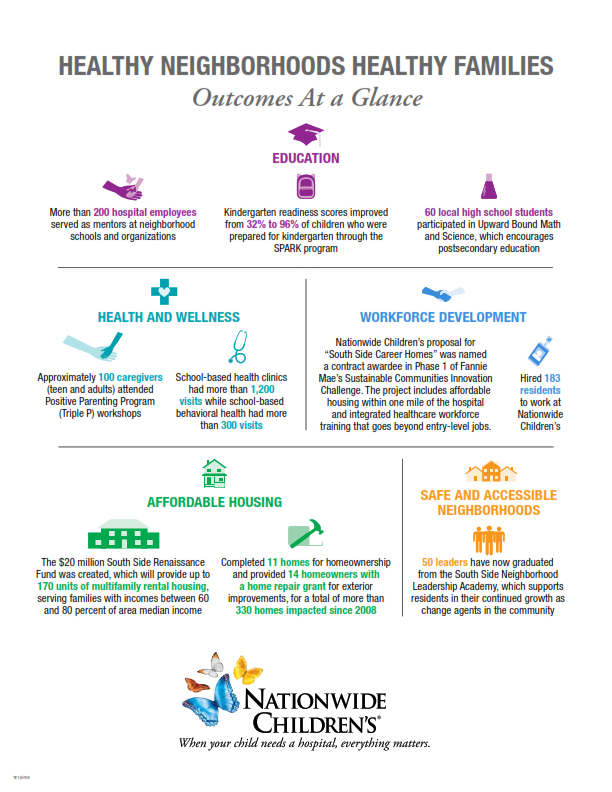 “The Southern Orchards neighborhood was one with gun violence, high infant mortality rates and high asthma rates in children,” says Kelly J. Kelleher, MD, MPH, vice president of Community Relations at Nationwide Children’s and lead author of the publication. “Houses were boarded up and vacant. You didn’t see kids playing outside much.”

In 2009, the neighborhood was characterized by the following:

The chief concern uncovered through multiple sources of data and information was neighborhood safety associated with population loss and surge in vacant and abandoned property.

“Residents were deeply concerned about blight and gang/drug activity, including on vacant properties in proximity to the school,” says Dr. Kelleher. “Our primary target for intervention became housing. Our collaboration committed to renovating, building and developing mixed income housing to reduce crime, improve the vacancy rate and better family outcomes.”

The publication describes $23 million invested in upgrading more than 300 homes through the Healthy Homes Collaborative, which was formed with not-for-profit development corporation, Community Development For All People. The entity is owned by Community Development For All People with a board of directors selected by the two groups. To date, the investment has grown to more than $40 million.

The partnership, with collaboration from the Columbus Mayor’s Office, accessed Neighborhood Stabilization Program funds from the city, acquired properties from the city’s Land Bank program and gathered support from contractors and realty agents.

At the start, HNHF was mainly focused on the short-term goals of removing blight, developing relationships with community partners, and increasing safety. The housing element was just the beginning.  HNHF also has launched numerous initiatives to address social determinants of health such as access to educational opportunities, workforce development and neighborhood safety.

“By taking both short- and long-term views of community development, Nationwide Children’s and our partners have ambitious goals across many domains,” says Dr. Kelleher. “The community-level approach allows the integration of epidemiology approaches, business resources and neighborhood development to support a mixed income community. Our next challenges will be to continue growth with new partners and to measure outcomes on children’s health in the neighborhood.”