Organic semiconductors are supposed to be the next generation semiconductors, which shows many great advantages over silicon. For example, their devices are easier and cheaper for fabricating and can be flexible. Their variable molecular structures can be designed to meet a variety of applications. With decades’ developing, organic semiconductors have shown great prospects in many applications, such as Organic Light-Emitting Diode (OLED), Organic Solar Cell (OSC), Organic Field Effect Transistor (OFET), etc. 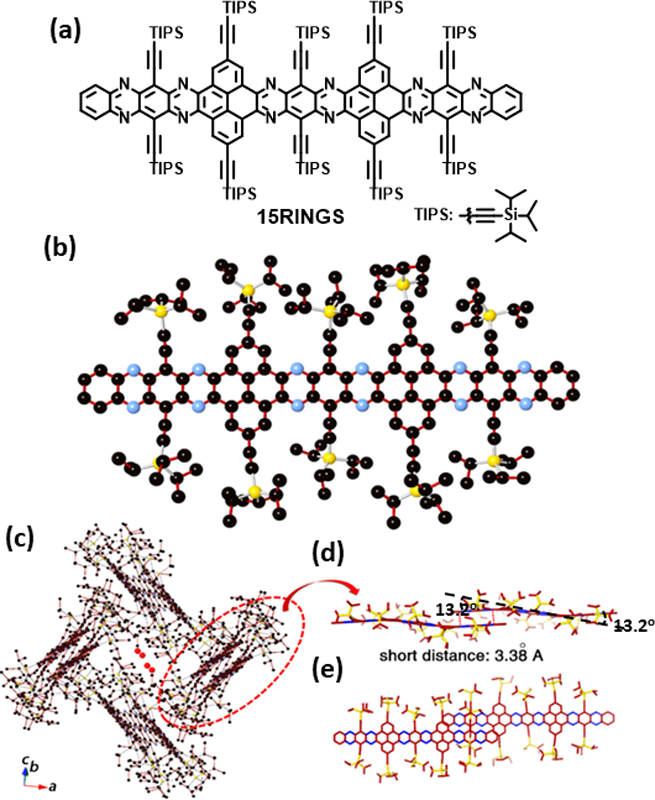 Prof. Zhang Qichun’s group have made a great effort in synthesizing large conjugation molecules, especially the linear fused azaacene derivatives, and studying them through SCXRD. They have reported the SCXRD confirmed large conjugation azaacene derivatives with ten aromatic rings (Chem. Asian J. 2016, 11, 482–485), and twelve rings (Chem. Mater. 2017, 29(10), 4172-4175) fused in a line. Recently, they have renewed the world record length of SCXRD-confirmed large conjugation molecules. A large azaacene derivative 15RINGS with fifteen aromatic rings fused in one row was confirmed by SCXRD, as seen in Figure 1b. From the side view of 15RINGS as shown in Figure 1d, they found that the conformation of the conjugation backbone is not so planar as the azaacenes previously reported. It is slightly twisted at two pyrene units. They supposed that this twisted conformation can release some strain force to stabilize such a large conjugation structure. The short distance between the conjugation planes is small (in Fig. 1d, 3.38Å), but the overlap is also very small (in Fig. 1e). The detailed structure analysis suggests that the π-π stacking is very weak. This is because the ten TIPS groups attached along the conjugation backbone block the π-π interactions by steric hindrance, though they are important to improve the solubility and crystallization property. 15RINGS shows low LUMO energy level (-3.74 eV) and narrow band gap (1.85 eV), which suggests it is a potential n-type semiconductor.

This research makes one more step towards SCXRD-confirmed large conjugation molecules. It is of great value as a reference for designing and synthesizing large conjugated molecules for high-performance organic semiconductors.