Circadian clocks rule our lives. In the course of evolution, almost all living creatures developed molecular mechanisms that optimally prepare our bodies for predictable , recurring events related to the regular alternations between day and night. This synchronization with our environment is essential for biological fitness, as it saves energy and ensures that all processes in our body are perfectly geared to each other and to the conditions surrounding us. Ideally, when no disruption occurs, we hardly ever notice our circadian system. Only very prominent outputs like wakefulness and sleepiness remind us of our internal body clock. However, when circadian clocks are not tuned up, their numerous functions become obvious: during jetlag, time zone travelers suffer problems with digestion, concentration, sleep, and immune function. Also, our mood is regulated by circadian clocks, and therefore it is believed that disrupted clocks contribute to the development of mood disorders like mania (in bipolar disorder) and depression (in major depressive disorder or bipolar disorder). Indeed, many mood disorders patients complain about symptoms related to a dysfunctional circadian system. 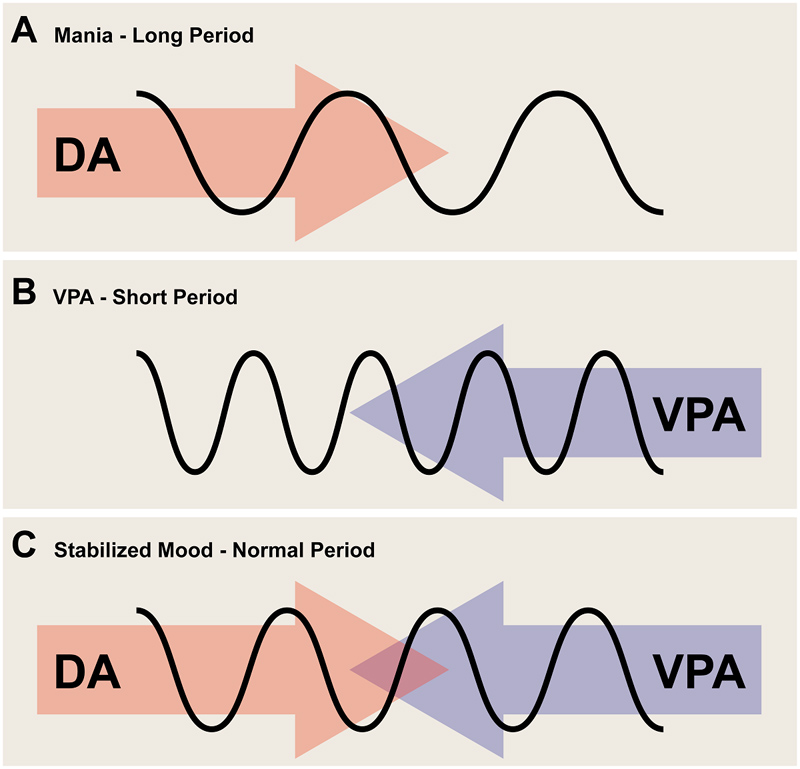 However, in determining what causes what, it is not always clear what is chicken and what is egg. In fact, it is probable that the causation is bidirectional: circadian clocks regulate mood and, vice versa, mood also has impact on our body clocks. But what are the mechanisms behind this two-way connection, and how can we manipulate them for therapeutic purposes?

The neurotransmitter dopamine, one of the brain chemicals most important for regulating mood, has some impact on the genes that build the core elements of circadian clocks, and dopamine contributes directly to mania in bipolar disorder. For these reasons, we developed the idea that dopamine might be responsible for circadian problems during times when bipolar patients are manic.

To test this idea, we used a mouse model called the DAT-knockdown mouse (DAT = dopamine transporter). These mice have constantly high dopamine levels and show behaviors that resemble human mania. First, we tested whether they display any circadian abnormalities based on their rest/activity cycles. Interestingly, we found that this is really the case: in comparison to control mice, DAT-knockdown mice have a longer active period and a shorter rest period each day, have a slower circadian clock (longer circadian cycle period), and overreact to light stimuli that adjust the circadian clock. In another experiment, we could show that the slow pace of their clocks is a direct consequence of elevated dopamine: when we blocked the dopamine system, the circadian period was normalized again.

Those findings are interesting because, for the first time, we have determined the nature of circadian abnormalities caused by increased dopamine in a living animal, and this could help us to find ways to counteract these phenomena. From older studies, we knew that the mood stabilizer valproic acid (VPA) reduces mania and also affects circadian rhythms. Thus, VPA might be a useful treatment for mania at least partly because it normalizes circadian rhythms.

We treated DAT-knockdown mice with VPA and measured their rhythms again. We found that VPA is indeed able to accelerate their clocks, compensating for the decelerating effects of high dopamine: the rhythms of VPA-treated DAT-knockdown mice were normalized. Importantly, VPA had such effects not only in mice, but also in human fibroblast skin cells we collected from bipolar patients.

Does the impact of VPA on circadian rhythms really contribute to its mood-stabilizing effects? In Drosophila fruit flies with suppressed DAT, which also exhibit mania-like behavior, the mood-stabilizing effects of VPA are more pronounced in the presence of a circadian clock than in flies genetically altered to lack a functioning clock. This suggests that the clock is a central target of VPA, and when the clock is missing, VPA cannot develop its full therapeutic potential.

In summary, our results help to explicate the close, bidirectional relationship between circadian clocks and mood. The mood-regulating neurotransmitter dopamine has an impact on circadian rhythms and, on the other hand, adjusting circadian rhythms with VPA may help to stabilize mood.