The parahippocampal region (PHR) is an interface region between the hippocampus and the neocortex located in the medial temporal lobe (MTL). The PHR has been implicated in many functions, including long-term memory, working memory, and perception. Given these important and complex functions of the PHR, accurately identifying the PHR sub-regions in vivo human brains is one of the major obstacles in understanding human PHR function. 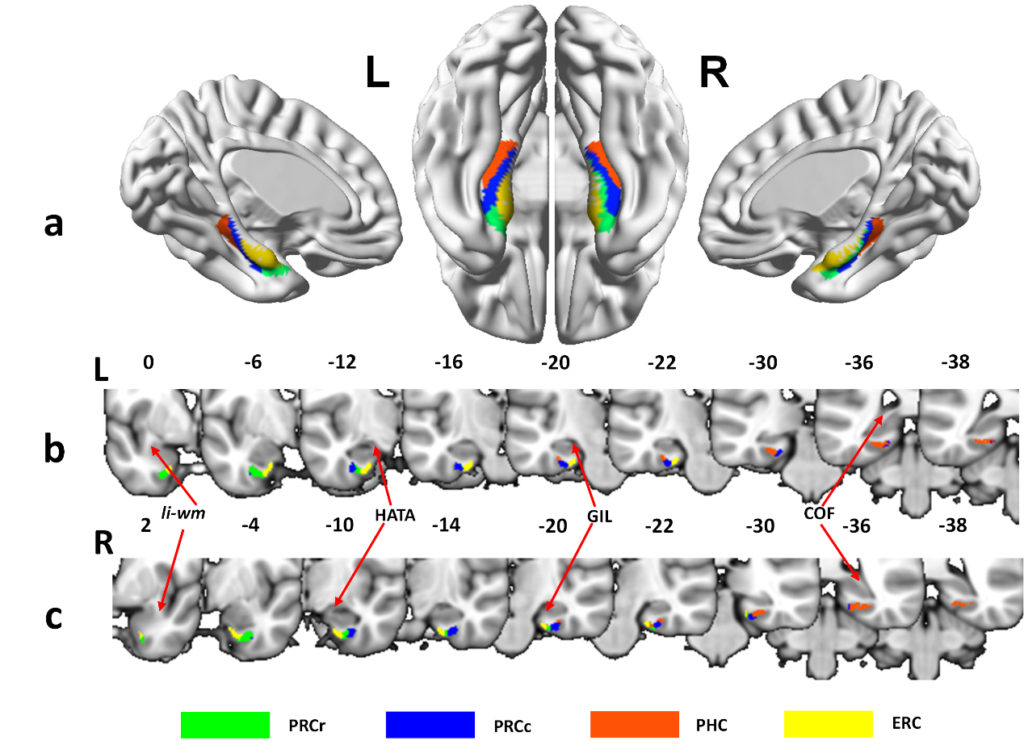 However, there is lack of fine-grained and accurately PHR atlas based on the neuroimaging data. The traditional brain atlases always have roughly description of this area (such as AAL, FreeSurfer DK atlas et al.), and the major drawback is that these atlases are not consistent with cytoarchitectonic studies. Therefore, current researching PHR function studies usually used guidelines for distinguishing the PHR sub-regions are based on visible landmarks on MRI images, based on cytoarchitectonic studies.

The traditionally accepted parcellation scheme for the PHR, based on cytoarchitectonic studies, identified three sub-regions: entorhinal cortex (ERC), perirhinal cortex (PRC), and parahippocampal cortex (PHC). However, this existing anatomical description of the human PHR is coarse, so functional heterogeneity may exist within the PRC or PHC. First, based on cytoarchitecture and tract-tracing studies, more precise parcellation schemes of the PRC and PHC in monkey brains subdivided the PRC into 35, 36r, and 36c, and divided the PHC into TH and TF. Second, although these may only be artifacts, some recent human fMRI studies found that, along an anterior-posterior axis, the most anterior and posterior portions of the PHR show significant functional differences and the middle portion seems to have a mixture of functions. Thus, these clues can be taken to indicate that the actual anatomical partition of the human PHR may be more fine-grained than the existing definition and that an integration subregion between the anterior and posterior portions of the PHR may also exist.

The group from Brainnetome Center, Institute of Automation, Chinese Academy of Sciences, for the first time, obtained a well-defined parcellation of the human PHR using connection-based parcellation techniques based on diffusion MRI data. Four major subregions were consistently identified in the PHR in two independent spatial resolution datasets (Fig. 1.). Specifically, a widely-studied area of the lateral PHR, often previously been called the parahippocampal gyrus (PHG), which is traditionally separated into the PRC and PHC, could be subdivided into the PRCr, PRCc, and PHC. The PRCc is a new sub-region identified in the human PHR atlas. This parcellation scheme should improve our understanding of the anatomical, connectivity, and functional characteristics of the PHR. Furthermore, the connectivity profiles for each subregion showed that the transition subregion (caudal perirhinal cortex, PRCc) is a functionally integrated subregion that integrates the anterior temporal (AT) – posterior medial (PM) systems (Fig. 2.). In addition, we found that the core components of the AT and PM systems connect with the PHR in the rostral perirhinal cortex (PRCr) and parahippocampal cortex (PHC), respectively, rather than connecting with the traditional, larger, and thus less concise PRC and PHC areas (Fig. 2.). These results suggest that the lateral PHR not only contains functionally segregated subregions but also contains a functionally integrated subregion. This study may constitute a major advance in the study of human memory systems and provide the basis for new lines of inquiry about medial temporal lobe function.