It was a breezy Sunday afternoon at a football game and the crowd falls silent as they watch the star running back lie motionless after a tackle. The medical team rushed over; the player is conscious and communicating, but unable to feel or move his arms and legs. Over the next fifteen minutes he gradually made a full recovery and decided to return to play.

The term concussion is now part of our general vocabulary. After years of research, we understand that a single concussion may have multiple short term effects – microscopic structural damage to brain cells, local chemical abnormalities that prevent proper brain functioning, and an increased susceptibility to repeat injury. There are also devastating, irreversible long term effects of repeated injury leading to motor and sensory deficits as well as neuropsychiatric and neurological problems, including dementia, Parkinson’s disease, depression, and suicide, respectively. Importantly, the understanding of the risks associated with brain concussion and the potential treatments have been improved significantly with the development of animal models. These models were able to describe the immediate and delayed effects of brain concussion and emphasized the dangers of repeated injury. Subsequent research defined a critical period of increased susceptibility to repeated injury that formed the foundation of medical guidelines governing return to play decisions from the amateur to professional level in contact sports. 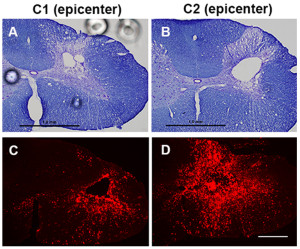 To address this issue our group developed an animal spinal cord concussion injury model. Similar to the clinical scenario, our model demonstrated complete and rapid sensory and motor recovery following an initial spinal concussion. A second injury, incurred following full recovery, however, demonstrated significant changes in paw preference (Fig. 1A), as well as more subtle changes in fine motor function (Fig. 1B), despite maintenance of overall locomotion. These changes were associated with an increased inflammatory cell response, despite preservation of normal tissue structure (Fig. 2). Taken together, this suggests that the critical time period for progressive functional deficit extends beyond full locomotor recovery from an initial injury.