The role of monocytes in ANCA-associated vasculitides 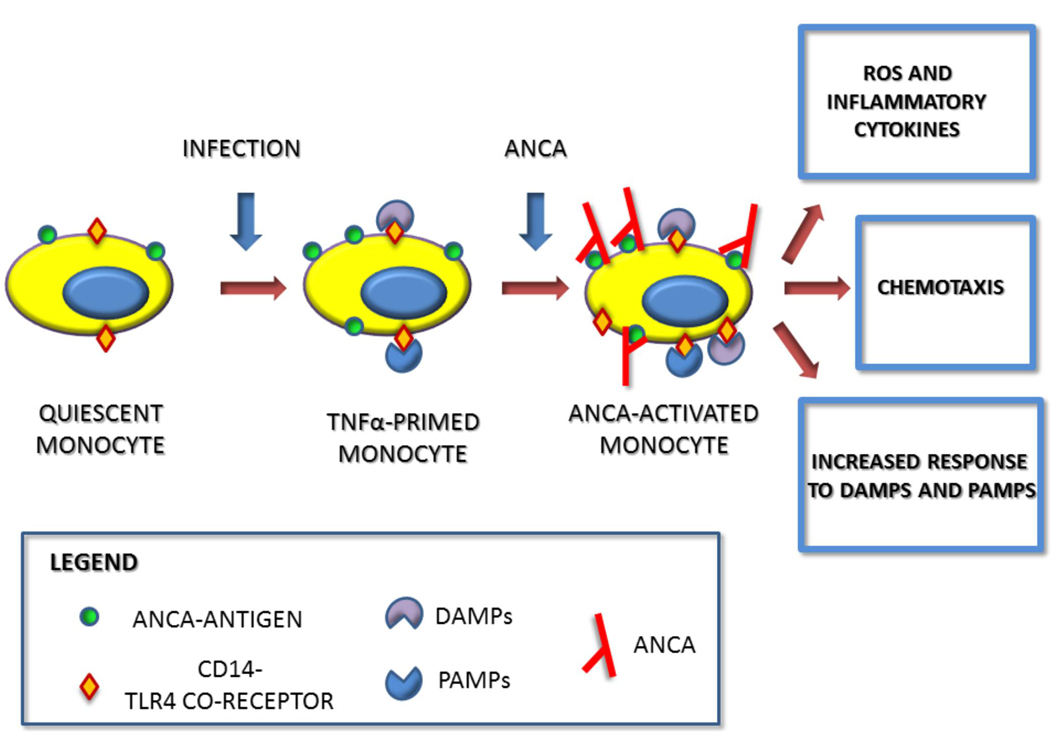 Fig. 1. Monocytes are key players in the inflammatory response amplification that takes place in AAV. Priming of monocytes with TNFα during infections increases ANCA antigen expression on the cell surface so increasing responsiveness to ANCA. Subsequent challenge with ANCA induces a number of responses, including the production of reactive oxygen species (ROS), pro-inflammatory cytokines and chemokines. ANCA-monocyte interactions also sensitize monocytes to microbial agents and alarmin activation by means of enhanced CD14 expression, perpetuating a vicious cycle of inflammation.

AAV are linked by the presence of circulating ANCA that typically target either proteinase 3 (PR3) or myeloperoxidase (MPO), antigens normally expressed within the cytoplasmic granules of the lysosomes of neutrophils and monocytes. The effects of ANCA on neutrophil biology have been extensively explored, and the role of neutrophils in AAV pathogenesis is established. However, until recently, the role of monocytes in AAV had received little attention. This is now changing, and studies suggest that monocytes may be key players in AAV pathogenesis.

Infections can trigger AAV onset or re-activation, and S. Aureus nasal carriers are more prone to relapses. Consequently, the antibiotic cotrimoxazole can be effective in preventing relapse in GPA. These observations suggest that there is a link between AAV, especially GPA, and infections. Being early responders to infectious agents, monocytes may be central to the inflammatory process that takes place in this setting (Fig. 1).   In particular, in vitro experiments have revealed that TNFα, produced during infections, increases ANCA antigen expression on the monocyte surface. Moreover, monocytes respond directly to ANCA. In vitro exposure to ANCA induces the production of reactive oxygen species (ROS) and a number of pro-inflammatory cytokines and chemokines, as well as increased adhesion molecule expression, all features that reveal a potential role for these cells in inflammation and vascular damage.

Overexpression of CD14 on monocytes of AAV patients, observed in both GPA active disease and remission, may lead to enhanced TLR4 responsiveness to microbial antigens (pathogen associated molecular patterns-PAMPs) and alarmins (damage associated molecular patterns-DAMPs) during infections, and could explain the in vitro observation that PR3-ANCA-primed peripheral blood mononuclear cells (PBMCs) produce higher levels of cytokines in response to lipopolysaccharide (LPS) stimulation (Fig. 1).

In renal biopsies from patients with ANCA associated glomerulonephritis, CD68+ monocytes represent the dominant cell type in glomerular infiltrates in early stages of the disease and preferentially locate within active lesions, where they express increased levels of Class II MHC and S100A8/A9 (calprotectin), both markers of cell activation. In MPA kidney biopsies, these cells are also associated with the formation of monocyte extracellular traps (METs), which in turn provide exposed ANCA antigens (MPO) to further boost the autoimmune response. Monocytes are also found within the granulomatous lesions of GPA. In these cellular structures PR3+ monocytes associate in a semi-ordered arrangement with T cells, B cells and antigen presenting cells, and as a consequence of their ANCA antigen expression and activated profile, may be critical for the breakdown of tolerance to ANCA antigens. In particular, monocyte interaction with T cells in this environment may be central to the development of persistent T cell activation, which may explain the deficiency in Treg cells and the expanded population of Th17 cells that are described in AAV.

Taken together these observations suggest that monocytes are likely to play key roles in both the development and maintenance of AAV. Targeting monocyte recruitment, activation or secreated products may therefore provide a valuable therapeutic approach for this group of life threatening diseases.