A current problem is that clinicians and researchers tend to deal with panic and PD based on one of these core factors as separate phenomena. In order to solve this problem, we propose a tripartite cognitive model of PD (Fig. 1). This new model of panic integrates relationships between the three core cognitive factors and the circular panic mechanism. According to this model, AS may influence the ongoing occurrence of panic by means of direct and/or indirect effects mediated by CM. When high AS is coupled with low panic self-efficacy the individual may overreact to internal threats (bodily sensations) and this may led to an increased experience of fear and to a panic attack with or without the intervention of CM. Therefore, in some instances the vicious circle of panic would work without catastrophic misinterpretations. On the other hand, AS may also operate via CM to facilitate de panic attack. In addition, we suggest that two components of AS and CM (i.e., the physical and cognitive concerns, but not the social concern) are relevant in the vicious circle of the panic attack. 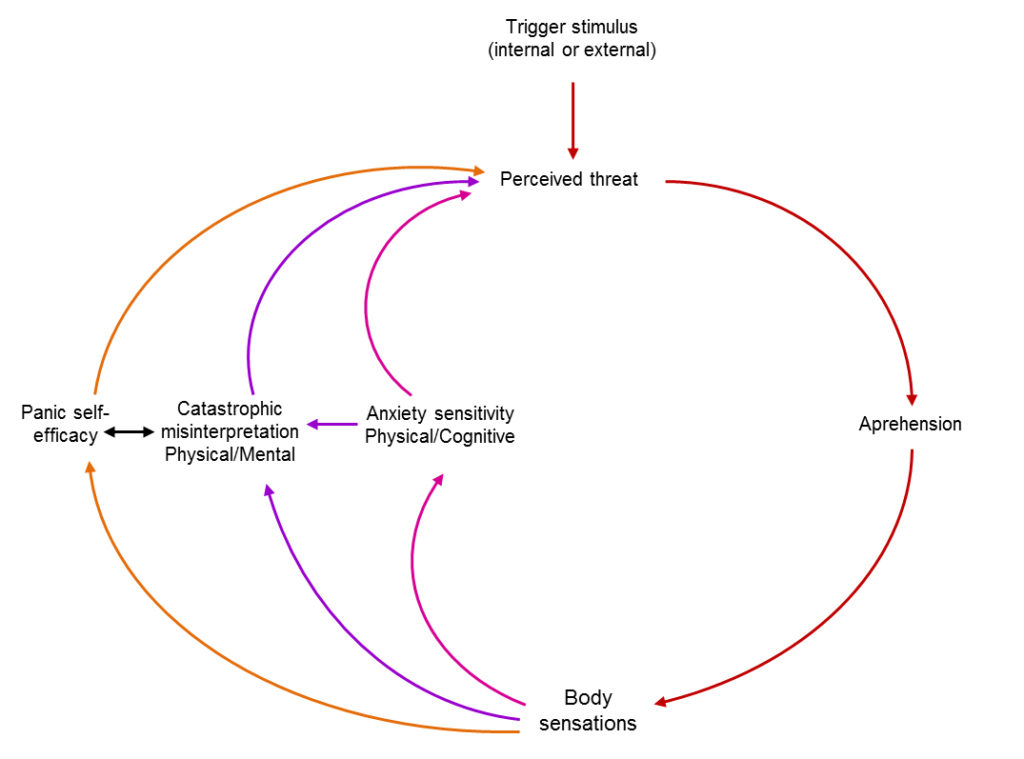 We tested the model, in a large sample of patients with a diagnosis of PD, by simultaneously examining the contribution of these three main cognitive factors and demonstrated that the three factors were able to uniquely predict PD severity. Our findings showed that (a) AS was found to predict panic severity partialling out CM and panic self-efficacy, (b) CM predicted panic severity after controlling for AS and panic self-efficacy, and (c) panic self-efficacy predicted panic severity after controlling for AS and CM. We also found that AS was able to predict panic severity in a dual way: firstly by means of an indirect effect on panic mediated by CM (patients with increased AS tend to misinterpret panic-like symptoms catastrophically), and secondly in a direct way (patients who experience more fear of symptoms of anxiety are more likely to experience more panic severity, independently of their possible CM of the panic-like bodily sensations) (Fig.2).

The tripartite model of panic has important clinical implications. Given the integrated role the three cognitive factors and their unique contributions, cognitive-behavioral therapy could be specifically targeted (a) to reducing the increased levels of AS and CM, and to increasing low levels of panic self-efficacy, and (b) at the multidimensional nature of AS and CM (the physical and mental components could represent unique treatment targets). For example, when physical concerns are dominant, interoceptive exposure exercises (hyperventilation or physical exercise) may be useful. When cognitive concerns predominate, treatment might be maximized by focusing on promoting thinking skills. Finally, it would be worthwhile to investigate the extent to which the three core cognitive factors integrated in the model correspond to distinct phenomenological characteristics and/or clinical severity course of panic, which could help to identify specific vulnerabilities to panic disorder.