The unappreciated role of the median eminence in energy balance regulation

Obesity results from a sustained imbalance between calorie intake and energy expenditure. It is associated with an increased risk of developing a variety of medical conditions that are widespread in Western countries, such as type 2 diabetes mellitus, dyslipidemia, non-alcoholic fatty liver, cardiovascular disease, and even some cancers. There are at present no resolutive pharmacological treatments for human obesity, and the only therapeutic option available to morbidly obese individuals is currently bariatric surgery. Pharmacological treatments are thus urgently needed to help these patients and to reduce the enormous cost of these diseases to the community and the national health services. 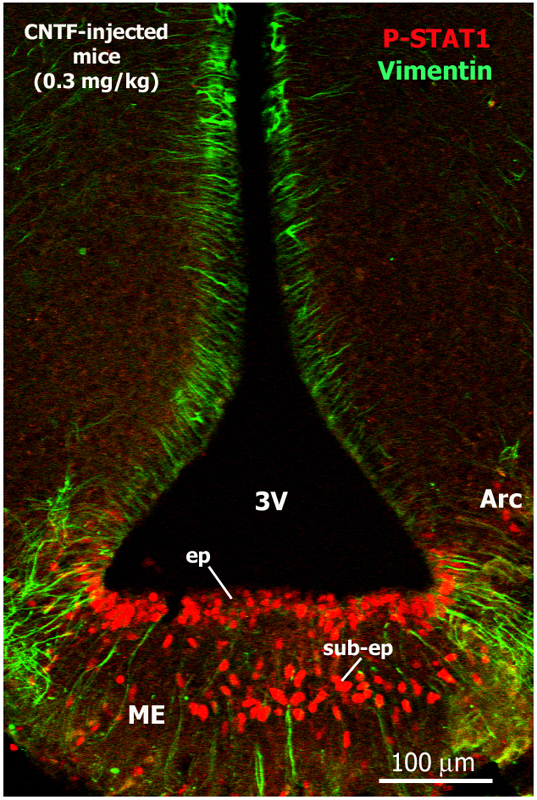 Double-staining immunofluorescence and confocal microscopy analysis of a coronal section of the hypothalamus from a mouse injected intraperitoneally with recombinant CNTF. The median eminence (ME), located at the bottom of the third ventricle (3V), contains numerous CNTF-responsive cells, detected as phospho-STAT1-positive cells (red), in both ependymal (ep) and sub-ependymal (sub-ep) layers. Vimentin (green) is a marker of tanycytes, ependymal cells that border the lower half of the third ventricle. Arc, hypothalamic arcuate nucleus.

The ciliary neurotrophic factor (CNTF) is a neurotrophic factor that exerts a wide range of differentiative and protective effects on glial and neuronal cells of the central (CNS) and peripheral nervous system. Early studies stressed its specific trophic role in the postnatal maintenance of motor neurons. For this reason, human recombinant CNTF was tested in neurological patients affected by amyotrophic lateral sclerosis, a CNS disorder that involves the death of motor neurons causing muscle weakness and atrophy and difficulties in speaking, swallowing and breathing. CNTF treatment failed to provide satisfactory effects on the motor performances of these patients, but led to anorexia and weight loss. Subsequent studies, also using Axokine, a modified form of human CNTF with improved potency and stability, confirmed that CNTF administration to humans and experimental animals results in decreased food intake, weight loss, and an improvement of obesity-associated hyperglycaemia, hyperinsulinaemia and dyslipidaemia.

From these exciting data, biological researchers started to investigate the possible role of CNTF as a novel satiety factor involved in mammalian energy balance control. Studies on murine models have suggested that CNTF satiety effect is due to activation of the signal transducer and activator of transcription (STAT) 3 in arcuate nucleus neurons of the hypothalamus. In our study, we show for the first time that CNTF administration to experimental animals has a most important action on median eminence cells than arcuate nucleus neurons. Indeed, in the median eminence CNTF activates through phosphorylation not only STAT3 but also other important transcription factors like STAT1 and STAT5, and it has an effect not only in neurons but also in glial cells.

It is well known that in the CNS neurons are protected from circulating, potentially toxic substances by the blood-brain barrier (BBB). The median eminence is a circumventricular organ, that is an area of the hypothalamus where the BBB is absent, thus allowing circulating substances to freely access neighboring area of brain parenchyma. Our results showing the prominent effect of CNTF on the median eminence highlight the involvement of median eminence in energy balance regulation as a possible strategic and selective point of access of molecules regulating food intake in the hypothalamus. Discovering molecules and pathways targeted by CNTF in median eminence cells has the potential to reveal novel molecular targets for anti-obesity drugs.