Metallothionein, oxidative stress and trace metals in gills of liver of fish species 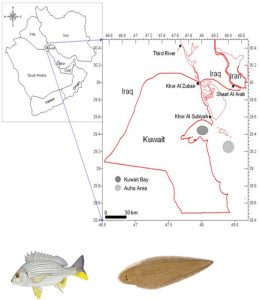 Kuwait Bay is important area that is influenced by the local municipal and industrial discharges. Therefore, two types of local fish from were studies, yellow finned seabream which is pelagic fish swim between the surface and the bottom, and tonguesole which is a bottom dwelling fish. Fish collected inside and outside the Bay to assess the current status of metals levels in the sediment and the collected fish tissues. Both types of fish showed differences in the metals content inside their gills and liver. Sea bream recorded higher levels than tonguesole especially those collected from inside Kuwait Bay, suggesting the presence of harmful substances in the sampling areas. The pattern of response in the tissue level showed that the stress was high in the area of higher contamination which was inside the Bay in comparison to outside the Bay. The response and the results obtained in fish identified the Kuwait Bay area as a stressed environment for resident living organisms.