As the number of people using rapid transit systems (subways) continues to rise in major cities worldwide, increasing attention has been given to the indoor air quality of underground stations. One of most serious air pollutants is known to be airborne particulate matter (PM) in subway systems due to its concentration and toxic chemical composition. In addition, PM found in underground stations has been known to contain iron (heavy metal) elements which can be hazardous to passengers. The source of PM found in underground stations can be distinguished by emission source location, which can be divided into indoor origin and outdoor origin. As for indoor source PM, various studies report that particles are generated by mechanical friction between wheel and rail and between wheel and brake pad.  These wear particles contain Fe, S, Ba, Cu, Sb and other heavy metals, and range in size from a hundred nanometers to a few micrometers. 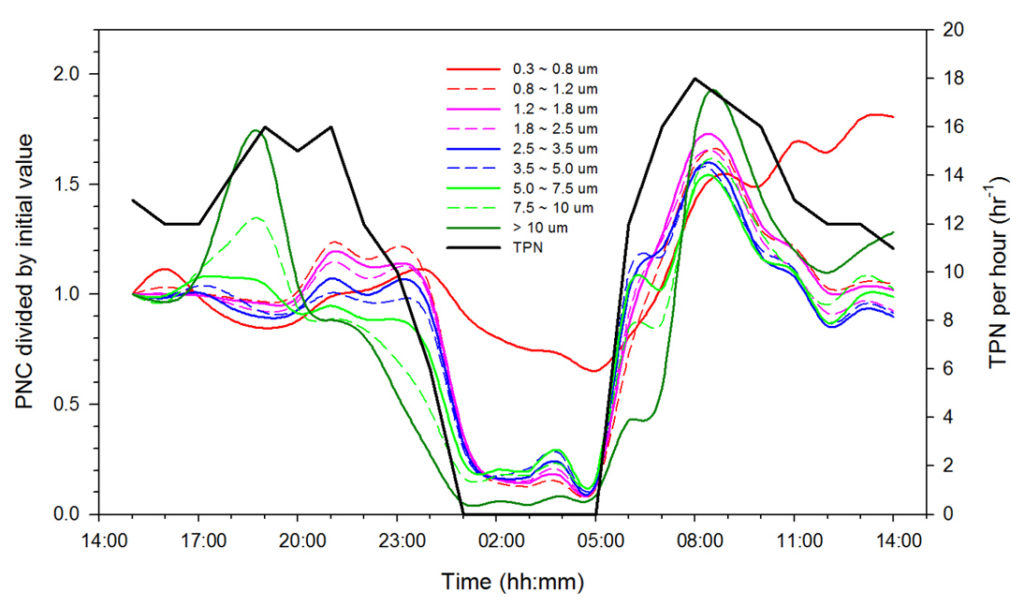 PM dispersed by train-induced winds can directly deliver PM from the tunnels into the platform areas of underground stations where passengers step onto the train. The correlation between PM concentration in the platform areas and the running trains has been reported on subway platforms where platform screen doors (PSDs) installed or not. Seoul subway stations have sealed PSDs which completely isolate the platform area from the track. A study on Seoul reported that PM concentrations in platform areas were reduced after the PSDs were installed. However, even PSDs must be opened for a specific period of time for passengers to board and exit the train, during which PM suspended in the tunnel can flow onto the platform. This study intended to observe the change of PM distribution by size in an underground station with PSDs installed and which is located near a main road in downtown Seoul, as well as to examine causes for the changes.

Figure shows changes in the particle number concentrations for each size of PM. The train passing number (TPN) in terms of stops at the platform is also shown for reference. TPN tended to increase during evening and morning rush hours. In all sizes except 0.3 to 0.8 mm, the change of particle number concentration showed a statistically significant correlation with TPN (p < 0.01). The distribution of PM over 0.8 mm in the platform area with PSDs installed correlated with the number of PSD openings (or TPN) and that the coarse mode particles, particularly particles sized over 10 mm, were mostly generated in the tunnel, not inside the station.

Fig. 2. Schematic of a monitored subway station of Seoul with installed PSD and measurement points.

The results indicate that the PM suspended in the tunnel flowed into the platform area even in a subway station where the effect of train-induced wind is blocked by installed PSDs, as this flow occurred when the PSDs were opened. The PM either settled or was re-suspended according to size and whether the ventilation in the platform area was in operation or if the platform floor had been washed. The ventilation system was more effective in removing PM of smaller sizes (fine particles) while the wash-out performed after train operations had stopped reduced the suspension of coarse mode particles the next morning. Despite installation of the completely sealed PSDs, inflow of coarse mode particles from the tunnel seems unavoidable, indicating the need for measures to decrease the PM generated there to lower subway user exposure since those particles cannot be reduced by mechanical ventilation alone. This research implicate that coarse PM containing heavy metals (generated from tunnel side) proliferated especially during rush hours, during which it is very important to control those PM in order to reduce subway user exposure to this hazardous PM.