Ultraviolet (UV) lasers have a variety of applications in many fields like machining, labeling, measuring, and guiding, etc. Wide bandgap semiconductors are one of the most promising candidates for efficient and robust UV lasers. ZnO has a wide bandgap (3.37 eV) and large exciton binding energy (60 meV), which promises that lasers can be realized in ZnO in relatively simple ways. There have been many reports on optically pumped lasers from ZnO nanowires, films, and even powders in recent years, which confirm that UV lasers can be realized. Nevertheless, to realize the future applications of UV lasers, electrically pumped lasers are greatly wanted. Efficient electrically pumped lasers are usually realized in p-n junctions. However, ZnO is intrinsically an n-type semiconductor, it is still a huge challenge to dope the intrinsic n-type ZnO into p-type conduction. Actually many efforts have been devoted to the p-type doping of ZnO, although some progresses have been achieved, reproducible and reliable p-type ZnO is still rarely reported to date. It is accepted that the p-type doping of ZnO and other wide bandgap semiconductors has two major obstacles, one is the relatively large activation energy of acceptors, and the other is the relatively strong compensation. The large activation energy will impede the release of holes from the doped acceptors, while the strong compensation means that the doped acceptors will usually be electrically compensated by the residual donors or generated donors during the doping process. The aforementioned large activation energy and strong compensation hinder drastically the realization of p-type conductivity in wide bandgap semiconductors. Actually p-type doping of ZnO has been one of the most challenging issues in recent years. 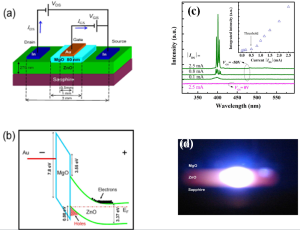 In a paper published in Scientific Reports (Sci. Rep. 5, 13641 (2015)), researchers from Changchun Institute of Optics, Fine Mechanics and Physics, Chinese Academy of Sciences, Hong Kong Polytechnic University and Zhengzhou University, demonstrated an electrostatic doping method, in which a negative bias was applied onto ZnO/MgO heterstructures, electrons in the ZnO layer will be depleted at the interface of the heterostructures by the bias, and holes will dominate the carrier transportation along the interface, while the other region is still electron dominated. In this way, quasi p-n junctions have been formed, and by applying forward bias to the quasi p-n junctions, UV lasing has been observed. The results reported in this paper may provide an alternative route to efficient optoelectronic devices by circumventing the two major obstacles of large activation energy and strong compensation during the p-type doping of wide bandgap semiconductors, thus may promise high-performance ultraviolet optoelectronic devices.