Plant-parasitic nematodes are small roundworms that predominantly feed on roots and cause crop yield losses. The root-knot nematode, Meloidogyne incognita is among the most damaging pests of several crops including cotton, tomato, and soybean. The infective stage of M. incognita, the second-stage larva, enters the roots of susceptible plants and diverts normal root cell growth into feeding sites called giant cells where the juveniles feed, grow, mature as females, and reproduce.  Although these nematodes are too small to see by human eyes, infection can be identified by the appearance of galls or knots on the susceptible plant roots, hence the common name, root-knot nematode (Fig. 1). 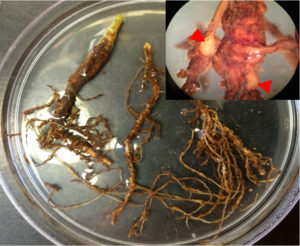 Fig. 1. Cotton root infected with M. incognita. Galls can be observed and adult females (arrow) was found in galls.

It is difficult to control pest nematodes. Use of crop rotation is difficult because the root-knot nematode feeds on several crops. Nematicides are often highly toxic and only partially effective. Until recently, nematode-resistant cultivars were only moderately effective and are still not generally available in highly-resistant forms in improved cultivars.  Better design of nematicides and development of better nematode resistant crop cultivars could be achieved by increased knowledge of genes and gene regulation that control nematode reproduction, development, and parasitism.

microRNAs (miRNAs) are small  molecules of ribonucleic acids  that regulate gene expression in  cells  and can be manipulated to  suppress gene expression. Through experimental inhibition of genes, miRNAs have been found to control several cellular processes including reproduction, development, and neuro-sensitivity. Even viruses have miRNAs that control viral genes. Our objective is to see whether or not the parasitic character of nematode pests can controlled by using miRNA-based technique? Can we use artificial miRNAs to silence genes that control nematode reproduction and parasitism to manage nematode pests? As the essential first step to address these questions we did a comprehensive analysis to identify and characterize miRNAs in the plant parasitic nematode M. incogita.

Firstly we took advantage of the currently available small RNA database of M. incognita that resulted from deep sequencing analysis. We used a computational program named ‘miRDeepFinder’, previously developed in our lab, for miRNA identification. This program combines multiple criteria that are characteristic for both conserved and novel miRNAs. As a result, we have identified a total of 289 miRNAs in M. incognita. Among them, 254 are miRNAs are conserved and belong to 162 chemical families of miRNA.  In contrast 35 are M.incognita-specific and belong to 31 miRNA families. Species-specific miRNAs might play important roles in the parasitism of M. incognita. Further, we have verified the expression of several miRNAs in M. incognita using quantitative real-time PCR. Figure 2 shows the sequence and hairpin structure of several identified miRNAs. 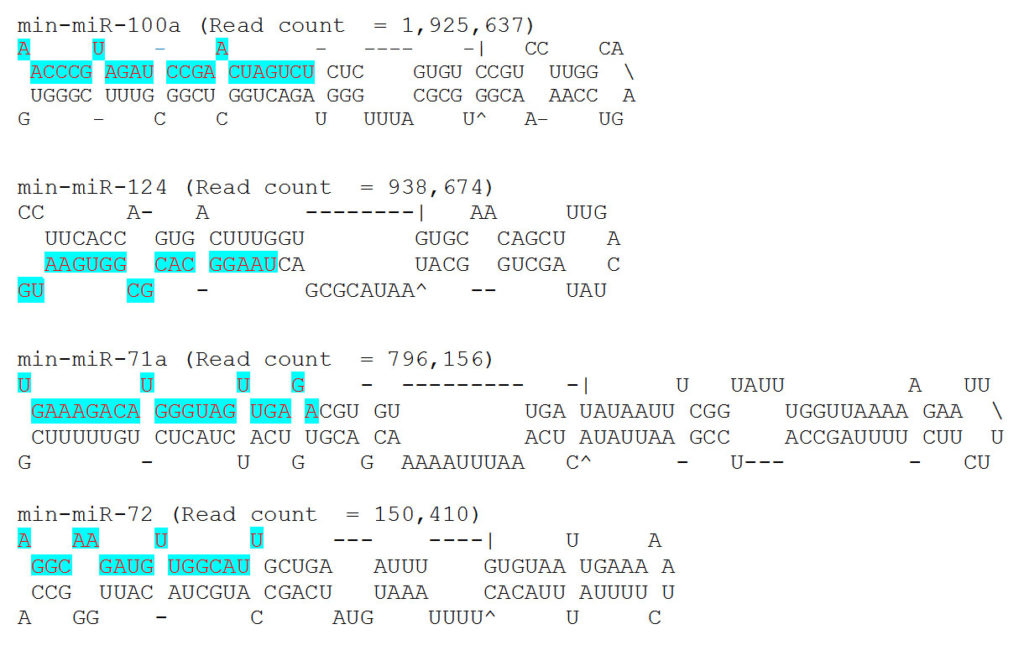 The number of sequence reads of a specific miRNA from deep-sequencing indicates their expression and abundance in an organism. We reported the 16 most abundant miRNAs with each having > 5000 sequence reads.  All these miRNAs are conserved across diverse taxa from helminths to vertebrates.  Importantly, these miRNAs show a high level of conservation among nematode species including both parasitic and free-living nematodes.

For example the most abundant miRNA is min-miR-100a, which is conserved in the parasitic nematode Ascaris suum.  Ascaris is a parasite in animal small intestines.  It has adapted to the parasitic life style by developing a huge reproductive capacity with up to 25,000,000 eggs laid by each female. The second most abundant miRNA is min-miR-124. miR-124 exists in the free-living nematode Caenorhabditis elegans and  in the parasitic nematode Angiostrongylus cantonensis. In A. cantonensis, the upregulation of miR-124 was found to suppress inflammatory markers that may result in reduced immune response, an important mechanism that allows the pest nematode to adapt to infectious conditions.