We synthesized the phosphorus-centered cation 1+ as its triflate salt. This imidazoliumyl stabilized cation is a suitable starting material for the synthesis of the first phosphorus centered radical dication 22+● by a one-electron oxidation reaction (Figure 1). As species with at least one unpaired electron radicals are highly reactive and tend to react with a second radical forming much less reactive dimers. This reactivity can cause unwanted side reactions in a radical involving process of the oxidation of P4. In general there are two different concepts of stabilization. Thermodynamic stabilization by delocalization of the unpaired electron is one of them. Kinetic stabilization by bulky substituents is another one. In case of charged species charge repulsion plays a key role in kinetic stabilization. Therefore, a phosphorus centered radical dication 22+● should be stable enough to be characterized by inorganic chemical methods.

In our approach the combination of electrochemistry with UV-VIS-NIR/EPR spectroscopy was used to investigate the stability of radical dication 22+●. Analytical electrochemical methods like cyclic voltammetry allow the oxidation of cation 1+ to radical dication 22+● and the subsequent reduction back to cation 1+. Cyclic voltammetry generates only extremely small amounts of substances and does not provide any further information on the products of the redox reactions. However, UV-VIS-NIR spectroscopy is sensitive to changes in the electronic structure of the molecule. In combination with EPR (electron paramagnetic resonance) spectroscopy, which is sensitive to unpaired electrons, a characterization of radical intermediates is possible. The coupling of electrochemistry with UV-VIS-NIR/EPR spectroscopy as spectroelectrochemistry (SEC) combines the reaction information based on the current and the in situ data from the spectroscopy. Figure 2 shows the result of an UV-VIS-NIR SEC measurement from the electrode surface in reflection geometry. The visible spectra (x-axis: wavelength; z-axis: absorbance) during (y-axis: time) the sweep of the potential (right y-axis) is shown in dependence of the current (right y-axis). This measurement shows three potential cycles, in which the cation 1+ is reversibly oxidized at E1/2 = 0.22 V (vs. E1/2(Cp2Fe/Cp2Fe+)) and the in situ spectrum (orange curve above). A reduction at potentials lower than -3.27 V shows the formation of a neutral radical 3● (green curve above). Further investigations in a transmission cuvette cell allow the prediction of the preparative accessibility of the radical dication 22+● and the neutral radical 3●. 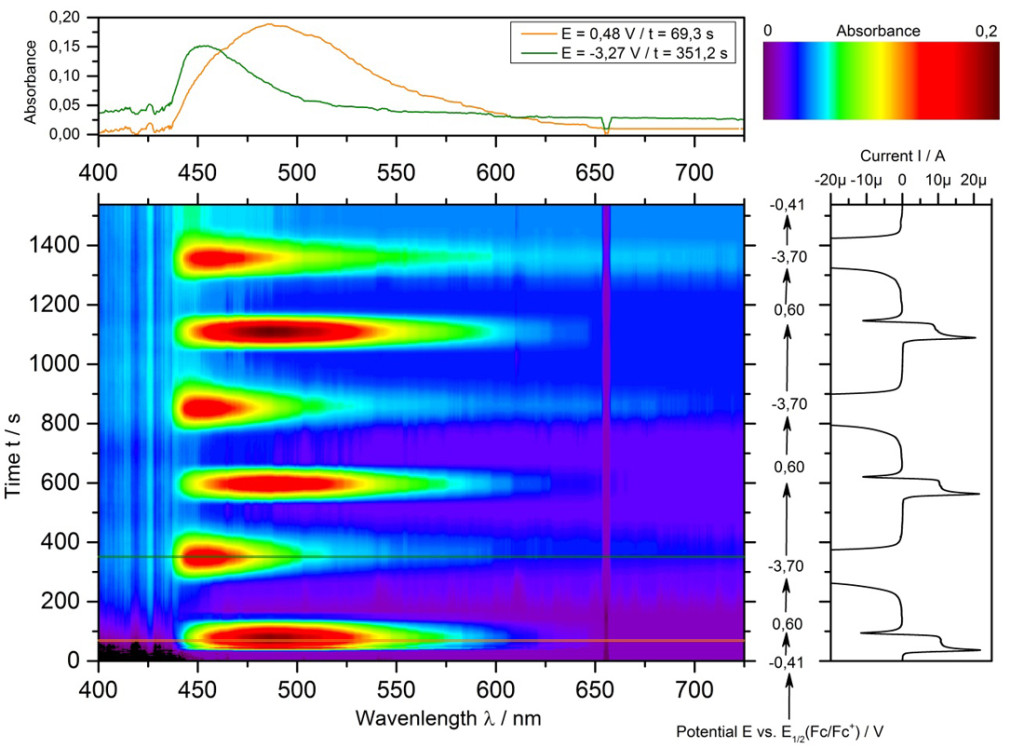 Figure 2 shows a picture of a transmission cuvette cell during the potential sweep over the E(1/2) of the oxidation of 1+ to 22+●. The formation of the radical 22+● can be directly observed by a notable color change to red. This technique shows no observation of the UV-VIS-NIR spectrum of neutral radical 3● because of its low stability. Combining the results from the reflective measurement and the more preparative formation in a transmission cuvette cell gives clear evidence for the high stability of radical dication 22+● and the low stability of neutral radical 32+●.

Motivated by the in situ observation of radical dication 22+●, subsequent preparative synthesis using nitrosyl triflate lead to the isolation of radical diaction 22+● as a red stable solid. This highly air-sensitive material was fully characterized by means of a single crystal X-ray structure analysis. Our work showed the way from the in situ observation of the first phosphorus centered radical dication 22+● to its preparative synthesis. This proofed the concept of charge repulsion stabilization of phosphorus radicals, which are maybe involved in a direct sustainable way from P4 to organo-phosphorus compounds.