What does “I need to breathe some pure air” really mean?

When people live in urban environments, getting away from the city, the noise and the smog, becomes some sort of “physiological need”. This is also true in exciting places like Barcelona. But, do we really have reasons to get away from the city? 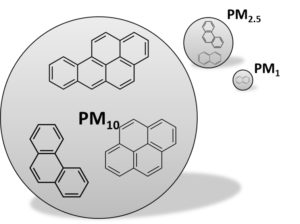 Fig. 1. In the present study, three fractions of PM were analyzed: PM10, PM2.5 and PM1. They are named after their size, being respectively smaller than 10, 2.5 and 1 micrometers. It was noted that most of the organic compounds were part of PM1, which can reach deeper parts of the respiratory tract.

A research team from the University Rovira i Virgili (TecnATox-Tarragona, Spain) has studied the organic composition of three fractions of particulate matter (PM) (Fig. 1), one of the components of the urban smog, in a suburban-industrial district located in the outskirts of Barcelona. PM is a mixture of liquid droplets and solid fragments smaller than 10 micrometres floating in the air, whose physicochemical properties are highly variable depending on the source and the weather conditions. Just think that, during the years of foggy Victorian London, PM was indeed the worst and most efficient murderer. Much more than Sherlock Holmes could have ever imagined. Nowadays, PM is a real concern because of its dangerous potential, being considered by some studies, as the most harmful air pollutant, responsible for more than 800.000 deaths per year globally. To better foresee toxicity of PM it is very important to know its chemical composition, which can also be used to elucidate the origin of this pollutant.

The most complex group of compounds analysed in the present research are the polycyclic aromatic hydrocarbons (PAHs). They comprise a bunch of different chemical substances formed by several aromatic rings and generated as consequence of incomplete combustions, being among them benzo[a]pyrene (BaP). Benzo[a]pyrene is the most powerful carcinogen produced during incomplete combustion of organic compounds like oil, gasoline and charbroiled food, and the major carcinogen in cigarette smoke. In the present study, researchers observed that total levels of PAHs in the suburban-industrial area were twice as much as those previously recorded in the core of Barcelona. These results clearly show the influence of combustion sources other than traffic in urban areas surrounding a great city core, when some industries are placed nearby.

Hopanes are another type of organic compounds present in the PM. They are usually used as traffic markers, since they are present in the lubricating oil of cars engines. Levels of these compounds were smaller in the urban-industrial area when compared with those from the core of Barcelona. The results mean that influence of traffic in the sampling area is smaller than in purely urban zones. On the other hand, biomass combustion products reached higher levels than in Barcelona, which means the influence of biomass burning is higher in the sampled area.

The  total content of carcinogenic PAHs were 0.9 ng BaPeq /m3, which is slightly lower than the annual limit established by the European Union (1 ng/m3). This level of pollution is translated into less than one case of cancer per million of inhabitants, the limit considered as assumable. As in many other big cities, Barcelona suffers from meteorological adverse situations, such as anticyclonic periods, when the smog accumulates and these values reach higher levels.  Consequently, and as in many other places around the world, during these episodes the contaminant levels cannot be considered assumable. It is, then, when the physiological need to breathe pure air acquires full “scientific” sense.