Turn on a tap, and many of us will be greeted with safe and clean drinking water. This is something that people living in developed nations often take for granted, as contaminated drinking water is a significant cause of illness globally, with around 4% of deaths due to unclean drinking water. In developed nations, the introduction of water quality assessments and treatment facilities has almost completely eradicated drinking water-related illnesses and deaths. However, most drinking water assessments do not currently include identifying the bacterial communities present in drinking water. Instead, a variety of biological, physical, and chemical indicators are often used to assess the health and quality of the product water. Indicator methods include quantifying the total number of bacterial cells, and measuring concentrations of nutrients, which bacteria can thrive on. Recently, a new DNA-based method (commonly known as metagenomic sequencing or metabarcoding) has emerged as a promising technique for characterizing complex biological communities, such as bacteria. To explain briefly, bacterial cells contain DNA sequences specific to particular species, and these cells can be broken open to release this DNA. A large number of species (encompassing entire communities) can be quickly identified in a single sequencing run by taking a water sample, and genetically identifying the numerous bacterial DNA sequences present in the water. 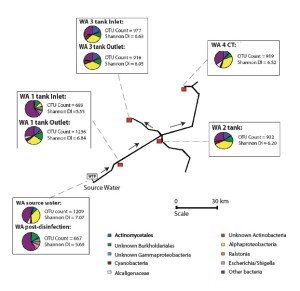 Fig. 1. A diagram of the bacterial diversity within the WA DWDS, including pie charts that depict the 10 most prolific bacterial taxa. WTP, water treatment plant (monochloramine dosing only); CT, customer tap. Red squares indicate sample collection locations. The WA reservoir is fed with a mixture of groundwater and desalinated water and has no physical filtration system. The WA WTP utilizes monochloramine. DI, diversity index.

In this study, we used this new method to characterize entire bacterial communities at different locations along two, real, full-scale drinking water distribution systems (DWDSs). We found that the bacterial community composition was significantly altered by water treatments in both drinking water systems, demonstrating the efficiency of current water treatment technologies. As you might expect, the source water samples had the highest bacterial diversity in both systems (Fig. 1 and 2), and also the highest bacterial cell counts (approx. 58% of these cells were living, viable cells). In contrast, the first samples collected post-treatment had significantly lower species diversity and a much reduced percentage of viable cells (3.4% WA system and 13.6% SA system). The DNA data also revealed that the bacterial community structures in the WA and SA source waters were different from one another; therefore, this type of information could lead to more effective treatment strategies that are customized for the unique diversity present in different source waters.

Nitrification is a big problem for DWDSs as it can lead to bacterial regrowth further down the pipeline. Water quality analyses of the two DWDSs revealed that some sites may be undergoing differing stages of nitrification. The customer tap (CT) sample at SA site 2 (SA-2 CT) had elevated bacterial diversity as well as nutrient levels which indicate nitrification (Fig. 2). The WA-4 CT sample also had nutrient levels suggestive of some nitrification (Fig. 1), and the SA-1 CT sample had an increased percentage of viable cells compared to other samples in the SA DWDS, suggesting that the site could be in the early stages of nitrification. The nitrifying bacteria Nitrospira and Nitrobacter were detected by the DNA-based metagenomic analyses. 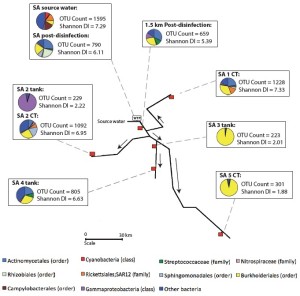 The DNA data were also screened for common water borne pathogens to determine if this method is a feasible tool for pathogen identification in drinking water. Several families known to contain pathogens were identified in the systems, including Clostridium, Campylobacter, Corynebacterium, Escherichia coli, Mycobacterium, Legionella, Burkholderia, and Leptospira. However, the cell count analyses revealed that the disinfection step reduces the percentage of viable bacterial cells to such small numbers, it is likely that these pathogens are nonviable cells (i.e., they are effectively neutralized, but the DNA material has not yet degraded). Even so, the ability to identify these demonstrates how these particular pathogens may become a cause of illness and death in Australia if drinking water treatments were to cease.

To summarize, bacterial communities in drinking water systems are complex, and although current monitoring methods are useful, they do not allow the intricate nature of these diverse communities to be effectively evaluated. The addition of new and innovative DNA analyses revealed complex interactions between biological communities and various DWDS parameters, such as water treatment effectiveness, nitrification, and tank storage effects. The metagenomic analyses also successfully identified groups which may include some pathogenic species. In the future, metagenomics should be used alongside current assessment methods to generate bacterial community databases for DWDSs. Such databases would eventually be able to provide information about which communities indicate a healthy, high-quality DWDS and may also help diagnose location-specific problems early on, enabling an appropriate solution to be achieved more rapidly.