Why are processed vegetable foodstuffs not as green as raw? Following the fate of chlorophylls

In addition to play an important role in photosynthesis and plant physiology, chlorophylls fulfil certain biological activities. Chlorophylls and their derivatives have been shown to exert antimutagenic and anticarcinogenic activity. In the human diet, these compounds are present in many foodstuffs of plant origin but during food processing changes in the structure can occur. Chlorophylls are susceptible to chemical and physical alterations in a degradation process in which are formed many artefacts. In this regard, mild processing treatments lead to pheophytinization, a reaction resulting from the effect of acids that causes demetallation, the lost of magnesium on porphyrin ring. 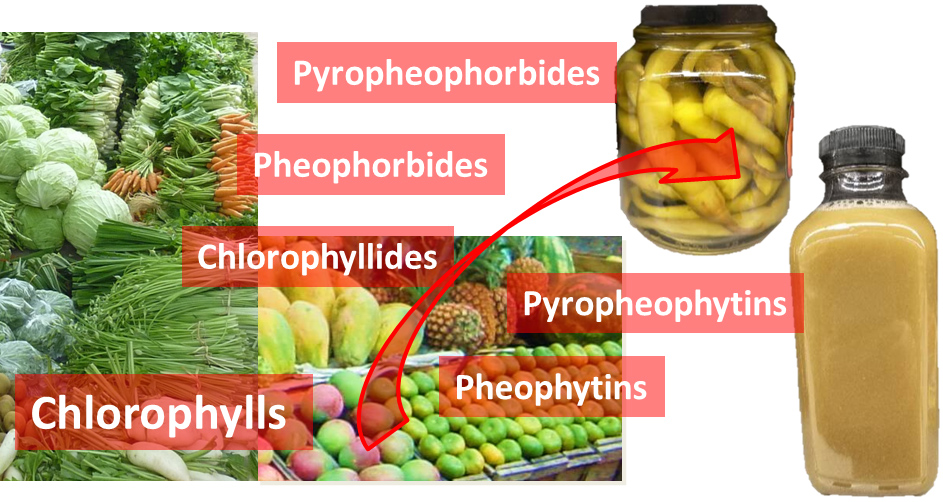 Demetallation and epimerisation, positional bond changes, are also promoted during heat treatment, and additional lost of groups occurs when the heating time is extended, yielding mainly pyropheophytins. Processing conditions can also induce endogenous enzymatic activity, leading to dephytylated chlorophyll derivatives (mainly pheophorbides) and chlorophyllides molecules at high pH conditions. Pheophorbide formation can be via pheophytins and via chlorophyllides. Indeed, pheophorbides are considered the last chromophore derivates involved in the chlorophyll degradation pathway. Storage conditions are also factors to be considered. For instance, the degradation of chlorophylls differs and the resulting degradation products vary in function of the light or dark conditions. In contrast to the bright green of chlorophylls, demetalitated chlorophyll derivatives, which are the main metabolites found in processed foods, are a dull olive brown.

Consequently, the food colorants known as E-141[i] and E-141[ii] are commonly added to improve product appearance. Both colorants comprise a mixture of a large number of compounds referred to as copper complexes of chlorophyll (E-141[i]) and chlorophyllin (E-141[ii]) molecules. Thus, chlorophyll and its derivatives are used as markers in food science and food processing.

Fig. 2. Scheme of the degradation pathways of chlorophyll a.

In this context, a rapid analytical method has been developed to identify and quantify chlorophyll derivatives in green processed foodstuff of distinct plant origin and to track chlorophyll degradation. The study of chlorophyll derivative profiles would allow the determination of degree of processing, as well as whether a colorant has been added. Ultrahigh performance liquid chromatography (UHPLC) coupled to mass spectroscopy (MS) has been choice to analyse chlorophylls and its derivatives. This technology offers many advantages as a reduced run time, high resolution and less solvent consumption.