Why food preparation is important 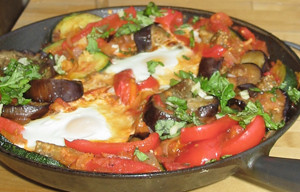 Plant foods such as fruits and vegetables are full of beneficial plant chemicals – phytochemicals – that can be lost during cooking. Water soluble phytochemicals, such as cancer-preventing glucosinolates from members of the cabbage family and phenolics from the onion family, leach out of vegetables when they are boiled. Substances like vitamin C and the sulfur compounds found in garlic are destroyed by heat, although this is less of a problem for other plant phytochemicals such as the red and orange anti-oxidant carotenoid pigments found for example in peppers and tomatoes.

Does this mean we should be eating raw vegetables? A few studies do suggest that raw vegetables give greater protection against cancers. But cooking can also have benefits. Frying vegetables in oil frees up nutrients bound up in cells and, in the case of fat soluble nutrients, makes it easier for the body to absorb them. The increased absorption of the red pigment lycopene from tomatoes after frying them in oil is a good example. But the jury is still out on whether this translates into improved health benefits, in this case protection against prostate cancer.

Even the way vegetables are chopped can be important. Pureeing tomatoes breaks down cell structures, enabling the semi-crystalline lycopene to be better absorbed. Chopping vegetables mimics herbivore attack by activating enzymes and generating defence compounds in members of the onion and cabbage families. These defence compounds help ward off predatory attack in nature, but more importantly for us, they also have anti-cancer and other beneficial effects in the body. The more cell damage there is, the more defence compounds are generated, and so a pureed garlic clove has more beneficial nutrients than one that has been only roughly chopped.

Despite these interesting findings, they are usually ignored in dietary recommendations. In this review article, we ask if food preparation should be given more consideration, especially when it comes to preparing the Mediterranean diet. Although widely recognised for its health benefits, the Mediterranean diet is described in terms of the foods we should and should not eat with little consideration of how the foods are prepared. But someone from a non-Mediterranean country may prepare their food quite differently from a person eating traditional Mediterranean cuisine. In Mediterranean cuisine, vegetables are often stewed, retaining nutrients that are lost when boiled. Soups are common – another way of not discarding water soluble nutrients. Olive oil is used raw as a salad dressing and in dips as well as being a cooking medium. This prevents loss of heat labile antioxidants like hydroxytyrosol, recently identified by the European Food Safety Authority as a key component in extra virgin olive oil that protects against the oxidation of cholesterol and probably reduces the risk of cardiovascular disease. Olives are processed in traditional ways rather than the more industrial ways that can destroy beneficial antioxidants including hydroxytyrosol. Nuts such as almonds and walnuts are mostly eaten in their natural state – in their protective skins rich in antioxidants – rather than being de-skinned, roasted and adding salt. Meat is often part of a stew: this reduces overall consumption, while antioxidants in fruits and vegetables in the stew also reduce the formation of carcinogens that can result when meat is cooked on its own at high temperatures.

Although the effects of cooking on the nutritional value of foods vary widely, in many cases a small change in cooking practice may be at least as significant as eating an extra portion of fruit or vegetables a day. And this deserves to receive the same level of attention in public health messages.