Why is radiation treatment more effective for cancers caused by HPV?

Human papilloma virus (HPV) is the most common sexually transmitted infection in the United States and can lead to cancers in the affected organ such as the cervix. In the last 15 years, the rise in prevalence of HPV has also been linked to cancers of the throat, in particular a region called the oropharynx which includes the tonsils and the base of tongue. Cancers in this area are often caused by alcohol and tobacco use but the recent epidemic of HPV has lead to a surge in cases of virally induced tumors of the oropharynx which if not treated appropriately can spread to lymph nodes or other organs in the body. HPV-related oropharynx cancer afflicts over 25,000 people each year. 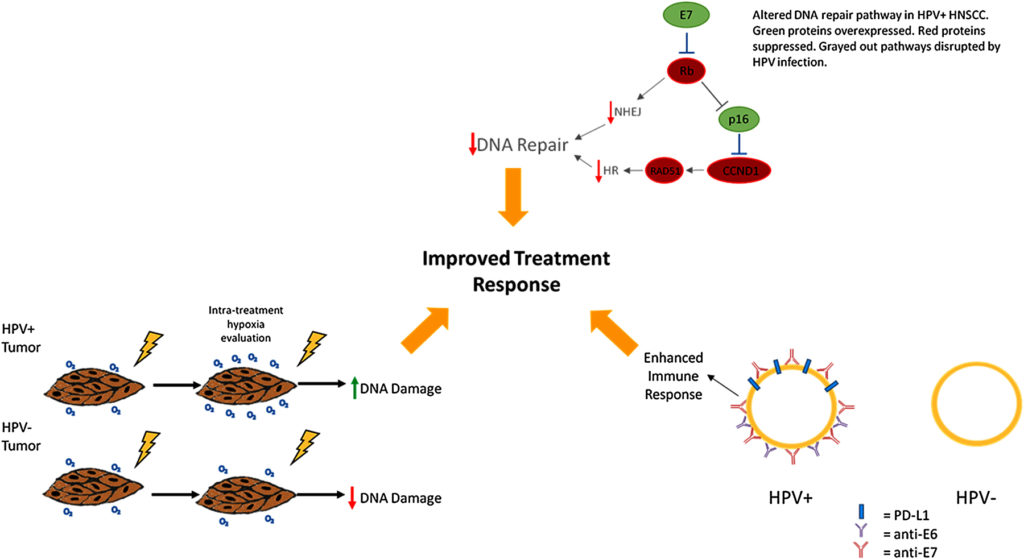 Fortunately, HPV-related oropharynx cancers respond extraordinarily well to radiation treatment, which is often given with chemotherapy to enhance its effect. The majority of HPV-related oropharynx cancers can be eliminated, effectively cured, with such treatment- a result that is much more difficult to achieve with cancers caused by tobacco and alcohol. There is something about HPV-related cancers that causes them to respond dramatically to radiation treatment, but the reason for this is not well understood. If we can identify the key to these tumor’s “radiosensitivity”, we may be able to tailor and personalize cancer treatment for these patients to a better degree and apply the lessons learned to more difficult to treat and deadly cancers. Some think that it may be because HPV-related tumors have higher levels of oxygen, which is an essential part of the chemical and physical reactions caused by radiation that lead to killing of cancer cells. It may also be that when HPV tumors are exposed to radiation, the immune system is somehow spurred into action to fight the virus-related cancer. In fact, cancers caused by other viruses, including the Epstein-Barr virus, also shrink rapidly when treated with radiation.

However, we believe the central reason underlying why HPV induced tumors are so sensitive to radiation treatment lies in a process called DNA repair, which is critical to the cell’s ability to survive and divide. Radiation works to kill cancer cells primarily by causing damage to DNA in the cancer cell. While normal cells have developed processes over the course of evolution to repair certain amounts of such damage and continue to survive in the face of injury, cancer cells often have mutations or abnormalities that prevent them from repairing their DNA effectively- an Achilles heel that can be exploited with radiation treatment. We believe that HPV, in the process of infecting cells in the throat and transforming them into cancer cells, also prevents them from being able to reliably repair damage caused to DNA, including that caused by therapeutic radiation and chemotherapy. In this complicated interaction with the cell, the HPV virus hijacks the cell’s intrinsic DNA repair machinery for its own survival and as a result deprives the cell of necessary defenses to fend off lethal injury such as that caused by radiation. Components of DNA repair pathways are increasingly being recognized as targets for cancer therapies that are generating significant excitement. We envision that a better understanding of the intricacies of how DNA repair mechanisms are interrupted by HPV will lead to more effective cancer treatments for many patients.