Zooming in on the ‘big eaters’ in atherosclerosis: a key role for oxidation and cellular localization of fat

Our sedentary lifestyle combined with the enrichment of fat in our diet has led to an increase of diseases affecting the health of our cardiovascular system. Cardiovascular disease is one of the leading causes of death, with atherosclerosis being the primary cause. Atherosclerosis is a chronic inflammatory condition of the blood vessels wherein fat and immune cells accumulate in the vessel wall, generating a so-called ‘atherosclerotic plaque’. Rupture of such a plaque can cause the formation of a blood clot which may obstruct the blood flow, resulting in a stroke or heart attack.

Of all immune cells accumulating in the vessel wall, the macrophages are one of the most important ones in determining the level of atherosclerosis. Macrophages, literally meaning ‘big eaters’, are key cells of the immune system that have the ability to engulf and destroy invading pathogens. Under conditions of severely elevated lipid levels such as during obesity, vessel wall macrophages can turn into so-called foam cells due to the accumulation of the content of oxidized low-density lipoproteins (oxLDL). Foam cell formation leads to a detrimental inflammatory response of the vessel wall. However, the molecular mechanisms by which oxLDL triggers vessel wall inflammation is unknown. 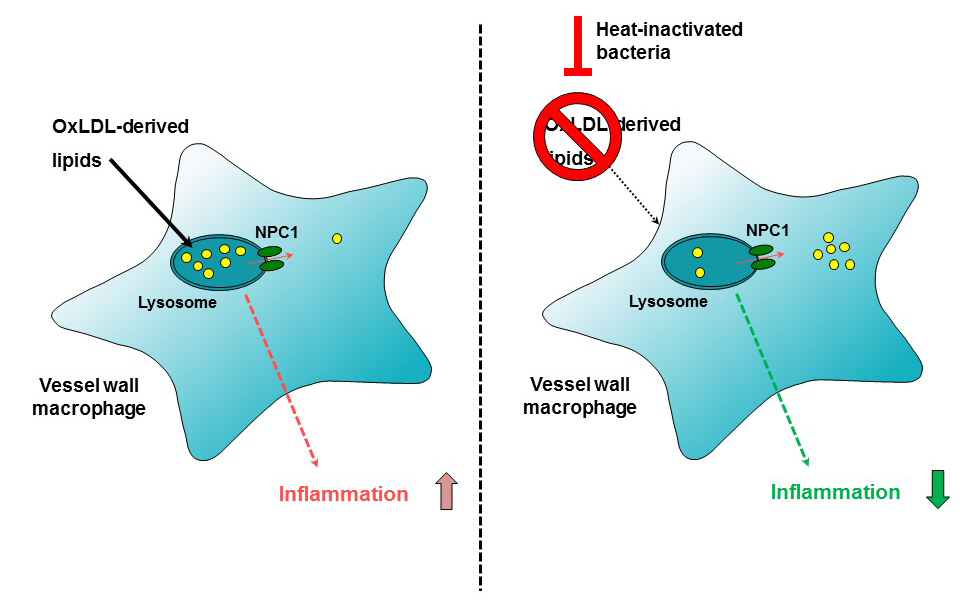 Fig. 1. Lysosomal accumulation of oxLDL-derived lipids in macrophages leads to increased inflammation in atherosclerosis (left panel). Preventing the uptake of oxLDL by these macrophages by means of triggering an immune response towards oxLDL, reduced inflammation (right panel).

Our hypothesis suggests a central role for lysosomes, which are intracellular organelles, in macrophages for inducing vessel wall inflammation. Under healthy conditions, lysosomes of macrophages ensure that the internalized lipids, which are derived from the plasma, are converted into smaller building blocks that can be transported throughout and eventually out of the cell. Under obesity conditions, it is known that, in contrast to the healthy situation, lysosomes cannot degrade the lipids as efficiently into smaller building blocks, leading to the accumulation of lipids in the lysosomes of the macrophages (Fig. 1, left). In non-alcoholic steatohepatitis, a chronic inflammatory liver condition associated with atherosclerosis, lysosomal lipid accumulation in macrophages was shown to cause an inflammatory response. This proves a key role for the intracellular localization of lipids in inflammation. However, so far, no information was available on the importance of oxLDL-derived lipids in accumulating in lysosomes of macrophages in the context of atherosclerosis.

Therefore, we posed the question: does lysosomal accumulation of oxLDL inside macrophages contribute to vessel wall inflammation?

To answer this question, we generated a special mouse model that developed lysosomal lipid accumulation specifically in the macrophages. Next, we injected 1 experimental group of mice with heat-killed bacteria of which it is known that it increases antibodies against oxLDL. As a consequence, the uptake of oxLDL was prevented in the mice that received this ‘immunization’ and vessel wall inflammation was compared to mice that did not receive this immunization. Our results demonstrated that the size of the vessel wall plaque as well as the level of inflammation was reduced in mice that received the immunization, indicating that specifically lipids derived from oxLDL particles contribute to lysosomal lipid accumulation in macrophages (Fig. 1, right).