A systems-level view of cerebellar function: The interplay between cerebellum, basal ganglia, and cortex

The cerebellum is a key brain region involved in many motor functions. It contributes to coordination, precision, and accurate timing of movements as well as to motor learning and adaptation. Alongside its role in motor control, it may also be involved in some cognitive functions such as attention and language, and in regulating fear and pleasure responses. The involvement of the cerebellum in so many functions could be understood by considering that it works in concert with other two important brain areas, the cerebral cortex which plays a key role in perception, memory, attention, awareness, thought, language, and consciousness; and with the basal ganglia which are associated with a variety of functions including: control of voluntary motor movements, procedural learning, routine behaviors, eye movements, cognition and emotion. Thus, the cerebellum, the cerebral cortex and the basal ganglia form a fundamental building block in motor and cognitive tasks of various complexity, from sensorimotor mapping to reasoning. This systems-level view is increasingly supported by data demonstrating that the cerebellum and the basal ganglia receive input from, and send output to, different cortical areas through several anatomical links performing distinct functional operations. Moreover, recent findings reveal the existence of an anatomical substrate for the bidirectional communication between cerebellum and basal ganglia. 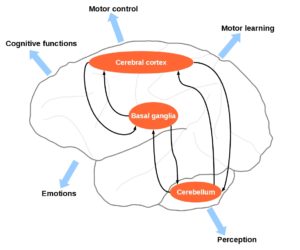 Despite this recent progress, we still lack a comprehensive framework that defines cerebellar function from a wider, systems-level perspective. Viewing cerebellum, cortex, and basal ganglia as an integrated system could lead to understand their functional and learning processes in radically different ways. Importantly, this new system-level perspective may allow to devise innovative therapeutic approaches for cerebellar, basal ganglia or cortical disorders targeting the whole system rather that the than the single component in isolation.

The goal of this consensus paper is to feed the discussion on the fundamental interactions between the functional and plasticity processes of cerebellum, cortex, and basal ganglia, conceived as forming an integrated system underlying several motor and cognitive functions. This consensus paper gathers diverse recent views on a variety of important roles played by the cerebellum within the cerebello-basal ganglia-thalamo-cortical system across a range of motor and cognitive functions. The paper includes theoretical and empirical contributions, which cover the following topics: recent evidence supporting the dynamical interplay between cerebellum, basal ganglia, and cortical areas in humans and other animals; theoretical neuroscience perspectives and empirical evidence on the reciprocal influences between cerebellum, basal ganglia, and cortex in learning and control processes; and data suggesting possible roles of the cerebellum in basal ganglia movement disorders. Although starting from different backgrounds and dealing with different topics, all the contributors agree that viewing the cerebellum, basal ganglia, and cortex as an integrated system enables us to understand the function of these areas in radically different ways. In addition, there is unanimous consensus between the authors that future experimental and computational work is needed to understand the function of cerebellar-basal ganglia circuitry in both motor and non-motor functions. The paper reports the most advanced perspectives on the role of the cerebellum within the cerebello-basal ganglia-thalamo-cortical system and illustrates other elements of consensus as well as disagreements and open questions in the field.