Arabidopsis ACYL-COA-BINDING PROTEIN6: a lipid-binding protein in the phloem

Plants utilize long-distance transport systems via their vascular tissues. The xylem is used for water and mineral transport, while the phloem translocates various macromolecules. Although lipids have been detected in the phloem sap, their movement is not well-understood. It has been widely acknowledged that aqueous human blood contains protein-bound lipids which facilitate the transfer of essential vitamins, are routed to organs for storage or metabolism, or merely act as messengers in multiple signaling. In plants, lipid signaling molecules such as oxylipins are closely associated with defense, and jasmonic acid (JA) represents a typical example. 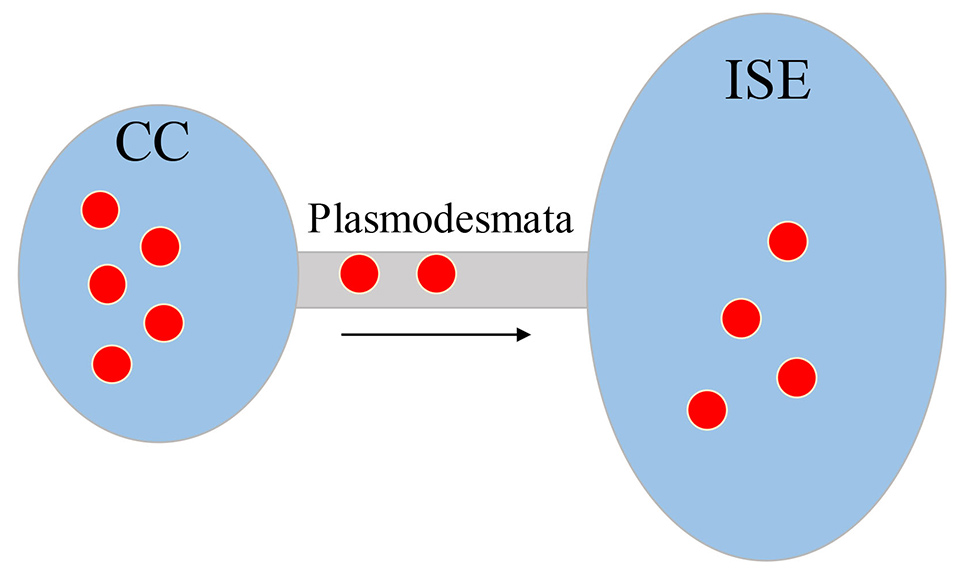 Fig. 1. AtACBP6 is transported symplastically from the companion cell to the sieve element. Transmission electron microscopy had captured the localization of AtACBP6 in immature sieve elements (ISE), plasmodesmata and companion cells (CC) from Arabidopsis stems (Ye et al. 2016). AtACBP6 (red) is likely synthesized in the CC and secreted into the SE through the plasmodesmata (grey).

Our recent studies revealed that AtACBP6 is present in the phloem sap and AtACBP6, with its lipid-binding nature, could act in transporting lipids in the phloem. A closer look at AtACBP6 distribution in the stem phloem using immunoelectron microscopy revealed that AtACBP6 is likely synthesized from the companion cells for transport into the sieve elements via the plasmodesmata (Fig. 1).

When phloem lipids were collected from cut petioles of the wild type (Col-0) and the acbp6 mutant for analysis, their differential lipid composition implicates a potential role of AtACBP6 in regulating phloem-associated lipid signals. More specifically, we detected an increase in the JA precursor, 12-oxo-cis,cis-10,15-phytodienoic acid (cis-OPDA), and a reduction in JA and/or its derivatives in acbp6 mutant phloem exudates in comparison to the wild type. JA, an oxylipin highly associated with defense and wounding, is able to generate long-distance signals in the phloem for JA-mediated signal transduction. Interestingly, upon wounding, AtACBP6 expression was induced in wild-type Arabidopsis leaves, suggesting a role for AtACBP6 in the phloem. AtACBP6 could regulate oxylipin levels and may play a role in JA biosynthesis in the phloem. However, questions remain to be answered with regards to the nature of AtACBP6 transport; thus an understanding of AtACBP6 action in phloem lipid translocation would be highly desired.