Belching: How does it work?

The belch seems like a simple rapid act with no clinical significance, but many studies suggest otherwise. Although most of the belch response occurs over a period of less than two seconds, the belch is actually composed of three independent reflex responses which involve many organs. In addition, recent studies suggest that the reflexes involved in belching may play a role in reflux disease. 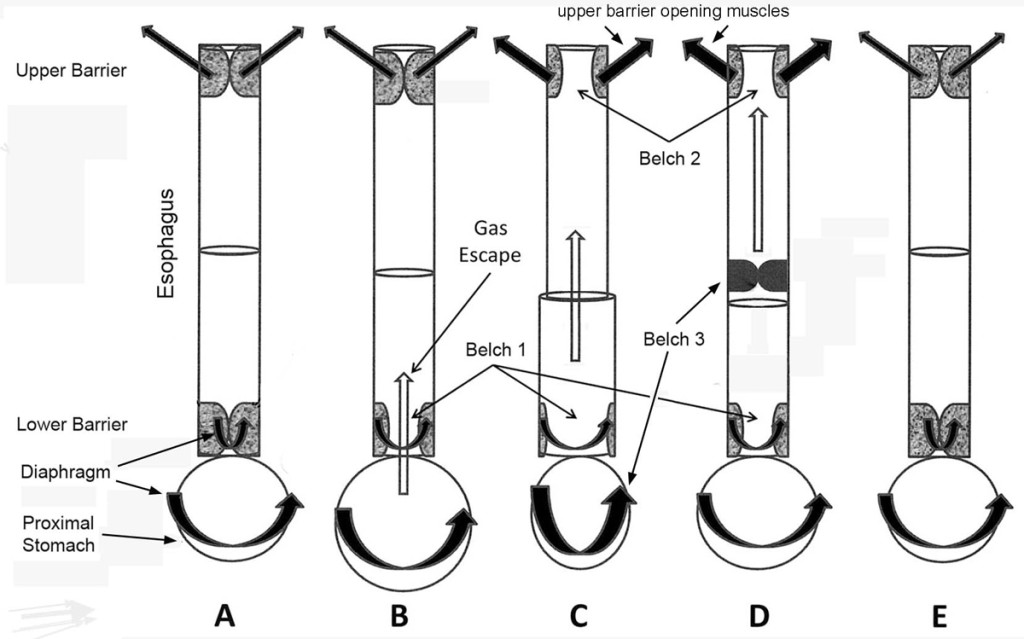 The rapid movement of air into the lower esophagus simultaneously activates two other reflexes. The second belch reflex (Figure: C and D, Belch 2) is the inhibition of the muscle barrier between the esophagus and pharynx, i.e. throat, which is created by pharyngeal muscles. In addition, this reflex also activates muscles which act to pull the esophago-pharyngeal barrier open (Figure: C and D). It is probably this rapid air movement across the pharynx that causes the sound of the belch. This reflex is also mediated by the brain through the vagus nerves. At the same time, the third belch reflex (Figure: D, Belch 3) is activated which initiates a contraction wave of the upper esophagus that moves upward toward the mouth carrying the air bolus to the top of the esophagus. This reflex is probably mediated by the spinal cord. The result of these two reflexes is to move the air bolus from the lower esophagus into the oral cavity.

The brain area that primarily controls the belch response is the area postrema which is in the medulla or hind brain. This is the most primitive part of the brain and the area that also controls much of the vomit response.

Therefore, athough belching is a benign reflex response, the component reflexes of the belch response probably serve as the transport mechanisms for the reflux of acid into the esophagus, pharynx and larynx that results in reflux disease