Aiming to conserve energy and reduce emissions, chemists have been trying to mimic the complex photosynthetic process of plants in relatively simple chemical ways, such as photocatalyzed reduction of carbon dioxide and solar-driven splitting of water into molecular hydrogen and oxygen. Actually, the original photosynthetic procedure was probably achieved through a reductive sulfur source. During the process of evolution, sulfur bacteria came to play the key role in the relevant transformation, which used various reduced inorganic sulfur compounds, such as thiosulfate, as electron donors for photoautotrophic growth. However, the photocatalyzed transformation of the thiosulfate in chemical ways has never been studied. 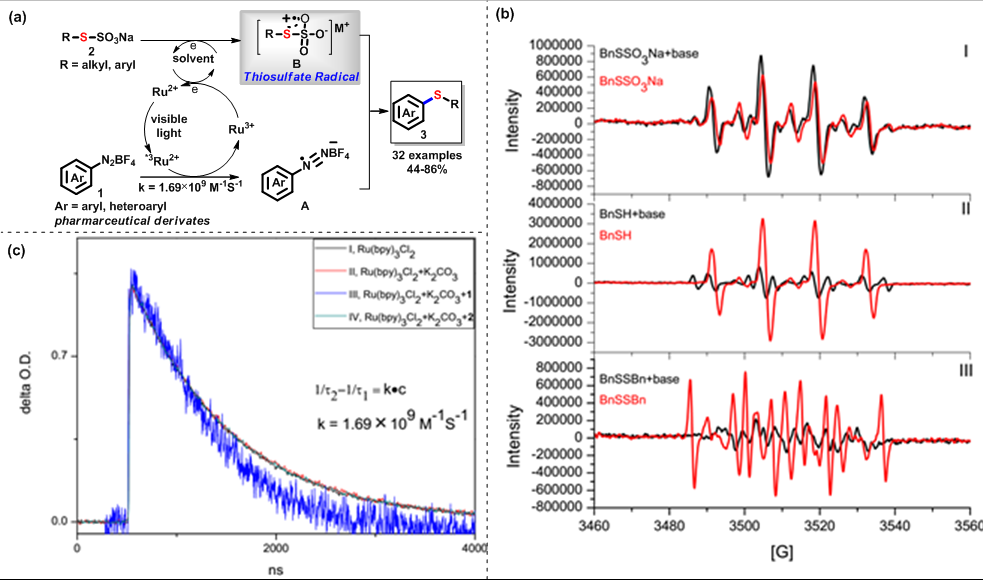 This study presents the thioether construction involving alkyl/aryl thiosulfates and diazonium salt catalyzed by visible-light-excited Ru(bpy)3Cl2 at room temperature in 44-86% yields (Figure 1a). Both aryl and heteroaryl diazonium salts with various electron properties were investigated for synthetic compatibility. Meanwhile, both alkyl and aryl substituted thiosulfates could be the substrates. Electron paramagnetic resonance studies showed that the newly founded thiosulfate radicals were promoted by the K2CO3 base. On the contrary, radicals generated from BnSH or BnSSBn were obviously suppressed (Figure 1b), demonstrating the special property of thiosulfate in this system. Transient absorption spectra confirmed the electron transfer process between Ru(bpy)3Cl2 and 4-MeO-phenyl diazonium salt at a rate constant of 1.69×109 M-1s-1 (Figure 1c). The corresponding radical trapping product was confirmed by X-ray diffraction. The full reaction mechanism was determined together with emission quenching experiment data. Furthermore, this system efficiently avoided the over-oxidation of sulfide caused by H2O in the photo-excited system containing Ru2+. 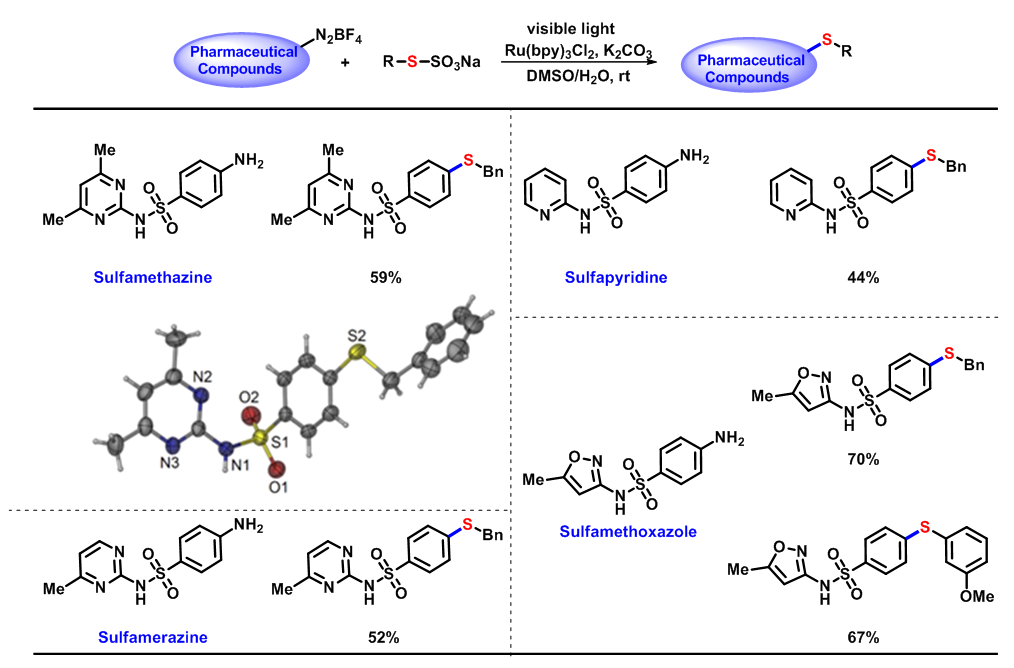 The uncovery of the thiosulfate radicals might be helpful for some other chemical and biological tranformation. Meanwhile, the late-stage sulfuration stratege would be beneficial for medicinal compounds screening.