Articular cartilage is a tissue found in joints throughout the body (knees, elbows, etc.) that plays a significant role in allowing the body to maintain proper movement and engage in physical activities; it also supports the transfer of weight and stress across the joint. Because cartilage plays such a pivotal role in sustaining a healthy, lively body, degradation of this tissue can lead to pain, discomfort, stiffness, and the inability to participate in once normal activities. Diseases associated with cartilage destruction include osteoarthritis and rheumatoid arthritis, which affect many people worldwide. The ability to repair damaged cartilage could drastically alter the quality of life for those individuals with compromised tissues from either disease or progressive wear and tear of their joints. 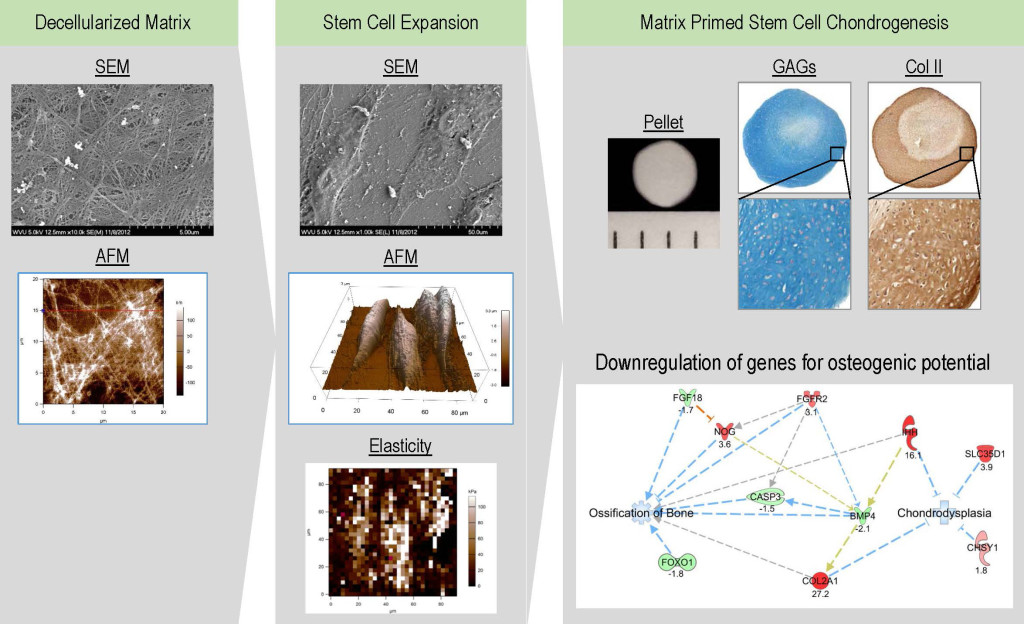 Cell expansion is an approach that allows the yield of a large-quantity of cells extracted from a small patient tissue biopsy. Two-dimensional monolayer culture is a conventional cell expansion technique; unfortunately, expanded cells become senescent, losing their proliferation and differentiation capacity. This study tested decellularized extracellular matrix (dECM) as a means of increasing the quantity and quality of stem cells derived from synovium (SDSCs). Synovium is a tissue found in joints in close proximity to articular cartilage and thus, it can be easily harvested through arthroscopy. dECM is produced from donor cells that are removed once a three-dimensional matrix is built. Patient cells can be grown on this new matrix, simulating an environment that is similar to growing within the body. The purpose of this study was to provide evidence for the superiority of dECM in the rejuvenation of expanded SDSCs in terms of cell proliferation and chondrogenic potential by comparing cell growth on conventional plastic flasks and in the matrix.

Four key results suggest that dECM is a superior substrate to provide a large quantity of high-quality expanded cells: 1) More cells grew on the dECM than on plastic. The cells on dECM increased in number by 8.57 fold compared to 6.95 fold on plastic. Also, dECM expanded cells formed a “softer” tissue type, which is important for the functional roles of cartilage. 2) The chondrogenic ability of dECM expanded cells were higher than the plastic group. The “chondrogenic potential” refers to the cells’ ability to differentiate (or change) into cartilage tissue, meaning that the dECM group was a better quality cell type. 3) Down-regulation of osteogenic (bone-forming) genes was observed in the dECM group compared to plastic. If the purpose of differentiating cells is to produce cartilage, bone forming genes would be counter-intuitive. 4) MAPK and Wnt signaling increased in the dECM group. These molecules have been associated with increased chondrogenesis, serving as a potential pathway for the increased cartilage growing capacity of dECM expanded cells. Also, the effects of cells growing “in” or “on” ECM were compared. The data revealed that cells growing in their own ECM were much less likely to form cartilage tissue than those growing on top of the dECM.

What these data suggest is that dECM can be used as a “preconditioning” method in order to grow a higher quantity of higher-quality cells for therapeutic use. The dECM also provides a way in which younger donors’ cells can be used to provide the dECM substrate, which can allow for cells from an older or diseased individual to have better rejuvenation effects, without fear of an allergic reaction.