Use of metals in dentistry is quite common for braces, crowns, fillings, implants. Problems sometimes occur, such as allergy, locally inflamed mucosae, or vague symptoms throughout the entire body. However, alternatives such as methacrylates will never completely replace metals, since their characteristics do not meet all clinical requirements.

Metals have also been speculated to be involved in the pathogenesis of neuro-degenerative diseases and to cause neurotoxic symptoms such as headache and disorientation. Amalgam is in particular debated for its safety.  Attempts to link its usage with neuro-diseases were reinforced by the finding that elemental mercury is lipid soluble and can cross the blood-brain barrier. Moreover its half-life time in the brain is estimated to last from several years to decades. Also the level of other transition metals was found to accumulate in liquor from neurologic patients. However, little evidence for immune mediated effects of dental alloys on brain cells has been reported so far.  Since chronic activation of innate immune responses is a common finding in various neuro-degenerative diseases we set out to evaluate the innate stimulatory effects of dental metals. 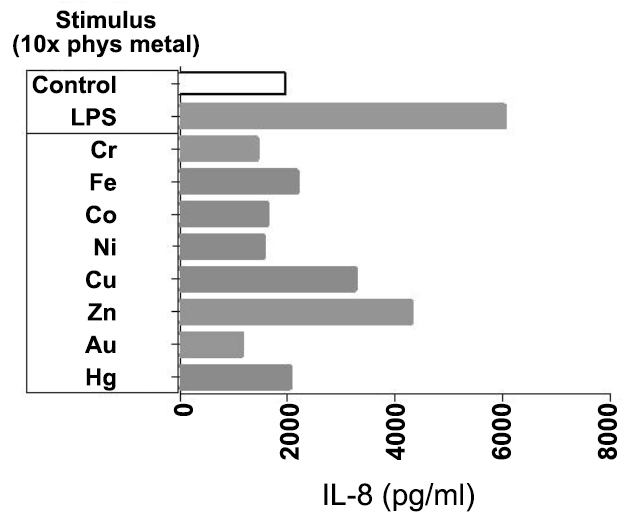 Fig. 1. Microglia responses to physiologic metal concentrations. Microglia from one representative donor were exposed to the individual metal salts (10x phys). The production of IL-8 is given in pg per ml.

We found that the transition metals cobalt, nickel, copper, zinc, palladium, gold and mercury in high supra-physiologic concentrations can activate the innate immune cells of the brain (microglia), with nickel and cobalt giving the strongest stimulation, measured as IL-8 production. However, in low physiologic concentrations, even up to 10 fold the levels found in normal blood plasma, only zinc and copper induced a detectable inflammatory response in microglia (see Fig. 1). Therefore, the commonly used high quality alloys are considered to be relatively safe with respect to neurotoxicity. Still, one should realize that, depending on possible corrosive conditions in the oral cavity, as well as on the integrity of the blood-brain barrier and the actual efflux from the brain, metals may accumulate in the central nervous system, thereby reaching incidentally neurotoxic levels.

Of note, zinc and copper, both metals with important physiological functions, were present in much higher levels in normal plasma – and thus in our in vitro stimulation experiments – than the other transition metals.  Although it is unlikely that dental alloys containing copper (present in palladium based alloys and amalgam) or zinc (present in gold based alloys) will substantially add to these relatively high systemic levels, disturbances in homeostatic control of zinc and copper should be considered as potential risk factors for chronic brain inflammation.  Interestingly, we found that even low levels of bacterial endotoxin (LPS) could potentiate the innate stimulatory potential of zinc and copper. Therefore also low grade infections may contribute to the neurotoxic potential  of metals.

In conclusion, we now have clear evidence that microglia can respond to metal exposure with IL-8 production and thus contribute to an elevated state of inflammation in the brain. The results confirmed that microglia can be triggered by metal salts, although at concentrations which may not readily be seen in situ. Nevertheless, also microglial cells reveal a strong synergy between exposure to metals, in particular to copper and zinc, and microbial endotoxin, indicating that such unfortunate coinciding activities may contribute to or augment chronic inflammation and neurotoxicity in humans.